Mayor Joe Hogsett joined members of the Indy Parks staff, the development team, as well as community leaders at a July 14 groundbreaking on the Broad Ripple Park site. “There’s quite a lot to celebrate in one of the city’s oldest and most beloved city parks,” he said. “The dedicated facility for indoor athletics will also feature greater engagement with White River, protect the riverbank, and restore native vegetation while strengthening the Broad Ripple community.”

In her brief remarks, Indy Parks director Linda Broadfoot announced, “I couldn’t be more thrilled.,” adding that she had taken Bollywood and belly dancing classes in the old building. “Broad Ripple Park is full of opportunities,” she continued. “This family center will continue the legacy of service with a better multi-use facility.”

Park manager Kathy Fitzgerald said she began working in the park in 1998 and was part of the team that moved programming into the former public library building that is being demolished to accommodate the new structure. She said Broad Ripple Park serves an average of 337,000 park visitors per year, and the new family center will enable park staff to provide more versatile programming for neighbors of all ages.

Plans for the new family center were created as part of the Broad Ripple Park Master Plan, which was unveiled in 2018 after extensive community input. The project weathered not only COVID-19 restrictions, but also a lawsuit that sought to stop the project in its tracks. Construction is expected to be complete by the end of 2022. 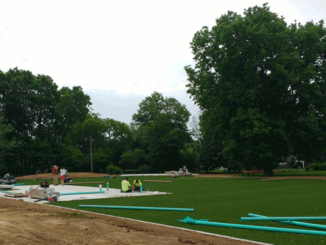