Since the Historic Midtown Neighborhood Initiative was launched as HARMONI in 2007, the district’s 17 diverse neighborhoods have experienced tremendous change.

Eleven years ago, the country was suffering in the Great Recession and the Midtown district was seeing disinvestment, population decline, instability in public schools, and declining property values. Every major institution that existed in our geography was largely an island. They were not talking to each other and relationships with adjacent neighborhoods were often strained.

The disrepair of basic infrastructure had reached a critical mass of unacceptability leading to a collective frustration with the City. There was a general feeling that decades of downtown investments had come at the expense of neighborhoods. The City’s neighborhood investment policy seemed to embody a “worst first” approach that required an area to fall into decline before receiving the attention of city leaders.

At the outset, identifying the assets was as important as identifying the challenges, so HARMONI raised funds to hire consultants and engage the community to create the Midtown Futureplan. The plan grew out of the frustration many neighborhood leaders and community members felt and a fatigue with creating plans that went nowhere. When we created the Midtown Futureplan, we vowed, “This thing will not collect dust.” While the plan offered guiding principles and future development strategies we aspired to see implemented in the next 20 years, we were also committed to seeing the plan’s goals realized in the short term.

The process of studying the data and understanding our strengths and weaknesses from an economic, housing, income, education, population, and demographic standpoint was invaluable. There was clearly something unique in Midtown—not only in the assets and opportunities but also in the ability to use those things to overcome the challenges.

We recognized early on that Midtown was a place that was not just important to us but also should be important to and for the city as a whole. Within the Midtown geography were the population density, the anchor institutions, the public greenspace, and the key transportation corridors to connect to every side of the city. Despite some challenges, the data showed that Midtown’s unique mixture of attributes contributed to the City’s economic development and talent attraction efforts.

A new mayor nobody knew much about had taken office in 2008, so there was a lot of conversation about how to make the case for investing in Midtown. HARMONI purchased 150 copies of Suburban Nation: The Rise of Sprawl and the Decline of the American Dream by Andrés Duany, Elizabeth Plater-Zyberk, and Jeff Speck, and distributed them widely. Copies were given to elected and appointed officials at the state and local level as well as corporate and philanthropic leaders. This spurred important conversations about the policy, land use, and zoning changes needed to encourage a mix of commercial and residential uses in walkable, transit-ready places like Midtown’s historic streetcar corridors.

Allies and supporters helped arrange briefing sessions where elements of the plan were presented to decision makers who could advocate for action that would stem further decline and chart a course for proactive intervention. With a plan in hand and a group of allies prepared to get to work, all that was needed were a few proof-of-concept projects.

In 2008, the decade-old plan to repave Broad Ripple Avenue between Keystone and College Avenue was of immediate interest. Mayor Greg Ballard’s administration faced the loss of federal funds if the project was not completed by the end of 2009.

In late 2008, Midtown was asked to identify and coordinate beautification projects in the district for Eli Lilly and Co.’s 2009 Global Day of Service. In partnership with Keep Indianapolis Beautiful, Indy Parks, and key Midtown neighborhood associations, nearly 1,000 Lilly volunteers painted half a dozen murals and planted more than 500 trees and thousands of shrubs and flowers in parks and schools—in one day!

Thanks to a federal Transportation Enhancement grant in 2009, plans to upgrade Alice Carter Park Place into a neighborhood park and gathering place included streetscape improvements. The intersection of Meridian Street and Westfield Boulevard was reconfigured to calm motor vehicle traffic, improve pedestrian safety, and create a landscaped gateway to the district.

The idea of collective impact was new at the time and HARMONI (which rebranded itself as Midtown Indianapolis Inc.) proved to serve as another promising iteration of the strategy. The idea of collective impact is not just getting a bunch of people to work together. It’s the idea that bringing a variety of people and organizations together to serve a common purpose generates a greater outcome than the sum of the individual parts.

Each of the activities HARMONI/Midtown Inc. undertook involved outreach to a diverse constituency: neighborhood groups, elected and appointed officials, developers, and nonprofit and private sector leaders. The organization also hired some of the top urban planning consultants in the city, who helped translate community aspirations into a list of specific targeted investment areas.

After lengthy analysis and discussions with community leaders and City officials, the establishment of a Tax Increment Financing (TIF) district emerged as the most attractive tool for leveraging public benefit from private development.

In 2010, consultants mapped out an estimated $106 million in district-wide projects in the following categories: transit/connectivity; sustainability; economic development; neighborhood revitalization; and retention/attraction.

At the end of 2018, we have exceeded our own expectations about our ability to stabilize population and increase investment across all sectors: housing, renovation, new development, and business investment. From a policy standpoint, transit is no longer just an idea but a reality, thanks to a referendum that passed by nearly 70 percent in Midtown. We’re no longer talking about if or when transit comes. The City’s first bus rapid transit line is currently under construction through the heart of our district.

Midtown has seen major infrastructure investments in nearly every bridge across Fall Creek as well as across the Central Canal. After more than two decades, the levee project will be complete in August 2019. Streets have been repaved, and curbs, sidewalks, drainage, and trails have been added.

We’ve discovered that the soundest investment you can make is in public spaces, including public transit and connectivity infrastructure but especially greenways or parks. Tarkington Park is a great example. Residents had an idea that they had studied, explored, and advocated for. We were in the right place at the right time with the right people to see it through. But we cannot say Tarkington Park is done. Indianapolis still has an embarrassingly low capital budget for parks—we have 210 parks with barely enough money to maintain half that number.

Moving forward, we have to invest in our shared assets. We cannot rely exclusively on the City for maintenance and upkeep, especially if we want to keep taxes affordable. As a community we cannot just build things and expect someone else to take care of them. That’s why in the future you will see Midtown Indy and its partners looking to evolve its role from just a planning organization to a doing organization.

Despite the tremendous growth in housing investments, commercial developments, infrastructure, and public spaces, there is still work to do. Some Midtown neighborhoods’ household income is less than half of the Midtown average income. Census estimates show that in 9 of 19 Midtown census tracts, the unemployment rate remains above 14%, with unemployment in three tracts as high as 19%. Homeownership rates in some Midtown communities remain at or below 20%, compared to an average rate in Midtown of 51% or more.

Midtown has not seen widespread residential displacement, but at the rate the district is growing, to avoid it we have to continue to work together and be intentional. If you look at the decrease in housing vacancy in the Mapleton-Fall Creek and Crown Hill neighborhoods alone, you’ll see that new residents are moving into formerly vacant homes. So while we’re seeing incomes and property values rise, we’re also going to see property taxes increase, which strains Midtown’s most vulnerable residents.

We can’t rest on our laurels and think this momentum we created is going to continue by itself. What the last decade has proven is that we have to continue to be deliberate and strategic, and to stay focused—not just on moving the big projects but also on making sure our developments don’t have a negative impact on others. The Midtown district has market strength, and we’re leveraging that market strength for equitable benefit. The idea of equity has to be real. It must become part of the promise of Midtown as a place. That means ensuring that the opportunities that are created in Midtown are truly available to all.

We’re not just making progress for the sake of progress; there’s purpose behind everything that occurs in here. Every new development is aimed at meeting a community need. It has to become clear that what we’re doing is not just more of the same. The magic of the “midtown” proposition is the partners who do great work. No one of us can do it all but together we can.

Michael McKillip is the executive director of Midtown Indianapolis Inc. A version of this article appeared in the December 2018/January 2019 issue of the magazine. 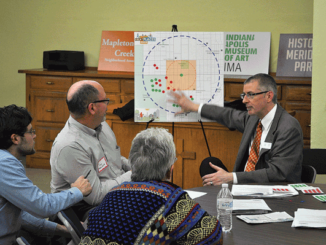 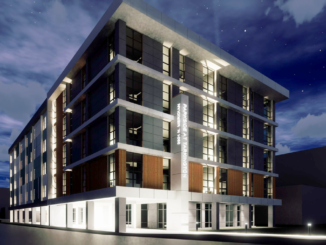