Faced with the closure of Fire Station 16 at 5555 N. Illinois, Butler-Tarkington neighborhood tempers are running hot. Indianapolis Fire Department (IFD) Chief Ernest Malone attempted to put out the fire at a packed March 14 Butler-Tarkington Neighborhood Association (BTNA) meeting, but the embers are still smoldering. “Your passion for this station I share,” Malone told the crowd. But the practical reality, he added, is that closure of Station 16 “gives us the opportunity to make adjustments without affecting response time.”

Chief Malone said there is a national formula for fire and rescue service response time: Get the first vehicle there within 4 minutes and 19 seconds 90 percent of the time, and the rest of them there within 8 minutes. IFD beats that average, Malone said. And by that measure, he pledged, Butler-Tarkington will still be covered by Station 32 in Broad Ripple.

B-T residents, merchants, and community leaders are skeptical, to say the least. In a letter to Chief Malone from BTNA president Clark Kirkman, they’re asking, among many other questions, why a Broad Ripple station that was saved from closing by neighborhood protests eight years ago, and that has been reduced to a two-person rescue squad since 2005, now needs firefighting equipment —and why B-T is being made the donor.

The reasons, Malone explained, are the growing density of Broad Ripple (Indy’s second highest-destination area), the pressure to save money countywide through staffing reductions, and the need to build up resources in the northeast quadrant where IFD has merged with fire departments in Lawrence and Washington townships. Within a few years, he said, a new facility is likely to be built somewhere in the Broad Ripple area to replace Station 32. Built in 1922, Station 32 is on the National Register of Historic Places.

At the March 1 Broad Ripple Village Association (BRVA) board meeting, Chief Malone’s announcement was greeted with applause. “Engine 32 is coming back home. We are increasing our public safety footprint in Broad Ripple because you deserve it,” he said.

Sentimentality may accrue to the eight-decade-old structure on Illinois Street, but that’s not the issue, Butler-Tarkington Neighborhood Association president Clark Kirkman insists.    “I’m primarily concerned with response time,” he said. “Full confession: I live just down the street. But that’s a secondary concern to me.”

Danger rather than nostalgia is the focus of BTNA as a whole, whose board voted unanimously to oppose closing the Station 16. On the board’s behalf, Kirkman wrote to Malone, Mayor Joe Hogsett, and City-County Councillors Joe Simpson and Colleen Fanning on March 7, expressing concern about the safety implications of first responders’ vacating the neighborhood. One resident collected more than 400 signatures on a petition to keep the firehouse open.

With Station 16 gone, Butler-Tarkington will be served from its perimeter, with the primary responders being Station 32 (Guilford and Westfield avenues), Station 31 (30th Street and Kenwood Avenue), Station 14 (42nd Street and College Avenue), and Station 12 (Kessler Boulevard and Michigan Road). Malone’s assurances of their response capabilities have caused a lot of eye-rolling, especially given the congestion an engine would have to navigate through Broad Ripple Village. Malone said the firefighters’ union supports the plan, which eliminates jobs to cut the budget but does so by attrition only.

Butler University, the property almost farthest west in coverage from Station 32, is also interested in the pending changes. According to Ben Hunter, chief of staff to Butler president James Danko, “We are committed to working with the Indianapolis Fire Department and Butler-Tarkington Neighborhood Association (BTNA) leadership on ensuring proper fire and medical coverage continues for our campus and the surrounding neighborhood. We value our close relationship with IFD and certainly understand their need to look at redeployment efforts to achieve efficiencies while maintaining a world-class service.”

The term “public safety footprint” came up on both sides at the BTNA meeting. Malone spoke of the imperative of enlarging it in Broad Ripple. A resident suggested that now seems a bad time to shrink it in BTNA, whose south end is vulnerable to spillover from one of the high-crime “focus areas” identified by police.

“I don’t want to be a fire chief who closes firehouses,” Malone told BTNA members. “This is not fun for me.”

BRVA executive director Brooke Klejnot said in an email, “We’re pleased with the idea of having the engine back in light of the intensive development in the area. We were impressed with the chief’s data about the average response time.” She declined to respond to BTNA’s objections, saying, “We’re not public safety professionals.”

The change could take place as early as May. According to IFD Battalion Chief Rita Reith, Chief Malone is meeting with City administration and presenting the questions and concerns that came from the community presentations he gave. “We expect a decision in the coming weeks,” she said.

Dan Carpenter is an Indianapolis native, long-time Midtown resident, a survivor of 36 years at The Indianapolis Star, and the author of four books.

BTNA invites citizens to show support for keeping IFD Station 16 open and first responders in Butler-Tarkington by gathering at Station 16, located at 56th and Illinois, on Thursday, April 28th, at 6:30 p.m. The organization wants to send a message loud and clear that neighbors do not want that station to close and the fire engine moved to Broad Ripple!

At 6:30 p.m., the community will thank the firefighters with a dinner prepared by local businesses, The Illinois Street Food Emporium and Byrne’s Grilled Pizza. The Food Emporium will also have cookies and water available for attendees. The first 100 people will receive a #SaveStation16 button. Blue III will be making an appearance at the event, too! 21st Amendment has agreed to let attendees utilize their lot to the east of their building for parking (about 25 spots), so it pays to come early! Or, if weather permits, walk or ride a bike. 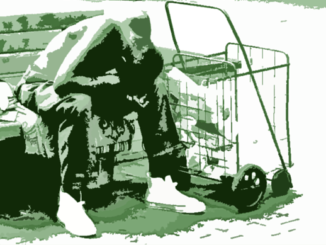 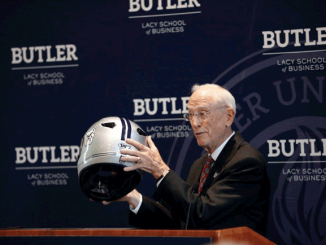