How does the resistance and rebirth of an Italian city after World War II figure into the changing face of education in Midtown schools? That might just be a question the children would explore at the IPS/Butler University Laboratory School. Located on the corner of Pennsylvania and 34th, the school is undergoing its own rebirth in a building formerly known as William A. Bell School 60.

The school is the dream child of Ena Shelley, Butler’s Dean of Education. Opened in August 2011 as a partnership between Butler University and Indianapolis Public Schools, Shelley credits the success to a group that includes former IPS Superintendent Eugene White, former Butler University president Bobby Fong, and the principal of the Lab School, Ron Smith. Meeting Shelley and listening as she shares the origin stories of both the Reggio philosophy and the Lab School, it’s no surprise that the school’s mission statement is “To inspire children to transform the world.”

The Reggio Emilia educational philosophy can be traced back to 1945. Following World War II and the fear of losing everything they held dear, particularly their children, the community of Reggio Emilia, Italy responded powerfully. Using materials to create a school from buildings that had been bombed, the community symbolically and literally rebuilt itself. With the help of a young teacher, Loris Malaguzzi, the school became one piece of a new collective philosophy of the community. It wasn’t about an educational model as much as it was a way of living, with the school a part of the larger community. In the early years, in fact, school was often held in the piazza, or center of town, to reinforce the idea that the school and the children were an integral part of the town itself. A key element is the image of the child as capable, creative, and responsible, an essential part of both the community and the community’s future, and treating them as such.

The Lab School embodies this same sense of transformation and synergy. As a partnership with Butler, it is a give-and-take between the university, the school, and the community as a whole. Student teachers do their fieldwork here, as well as take classes in the building itself. The latest in pedagogical theory is tried out in ways not available in other school settings. And, like the tenets of the philosophy the school is founded on, the learning experiences of both sets of students culminate in change now. This sets a foundation for everyone, teachers and students alike, continuing to do great things for the rest of their lives, because they know they can from having done it.

Shelley beams as she recounts the school’s inception. The idea germinated with her own college experience at Indiana State. She enrolled there due to its lab school, and to this day credits everything to that experience. “I knew our teacher education students would benefit from a lab school. I wanted that for Butler and for this community. I wanted to figure out how you embed yourself in the community and make a difference for the long haul.”

She credits the personal stories of both White and Fong with allowing her to do just that. “They were both visionary leaders. Their own personal stories drove them. Each of them believed that public school saved their lives.” The final piece fell into place with Ron Smith. “I needed someone with background and experience in Reggio, someone who sees the vision of working with the community. There were and are a lot of wonderful leaders in the IPS schools, but you can’t just step into a whole philosophy with no experience or background in it.” Smith had both. A former student of hers, he had been trained in the Emilio Reggio philosophy, and gone on to do remarkable things at the Warren Early Childhood Center. “I knew he understood what we were trying to do.”

The results have been amazing, reflecting the rich heritage of growth and change inherent in the philosophy itself. Smith guides a new family through hallways and classrooms in metamorphosis. Institutional walls and floors disappear behind organic and natural materials. Tree stumps replace chairs in some rooms, pillows and throw rugs in another. Plants hang in the hallway and thrive atop bookshelves near windows exuding natural light. Couches and dining room tables share space with “provocations”, areas for experiences that include a variety of materials and opportunities for exploration. The feeling is as if the walls separating a traditional learning environment have simply disappeared, surrounding the children in what feels like a natural habitat. The school emanates the warmth of a home. And in the middle of it all resides the true metamorphosis: children actively engaged in changing the world.

“We want the children to understand that they are capable of being leaders not only in the future, but now.” Smith points at a wall display, a key component of showing both quantitative and qualitative assessment, where a class has become interested in the life of the cicada. Early curiosity has led to a project where the class will be removing fencing at the front of the school, replacing it with pollinating insect habitats that will form a natural fence that shows both understanding and action. Another class, studying Indianapolis, was unable to find a guidebook for the city for kids. Their response? They are now making one of their own.

This year the school serves students from pre-K to 4th grade, with the intention to add a grade every year until it encompasses all students through the 8th grade. It currently houses 350 students, as well as another 60 that are served by St. Mary’s Pre-school. There are 28 staff, 19 of which are teachers. Their next goal, to create a Reggio inspired lab school at the high school level, is already in the works. In the fall, Shortridge High School will become the first Reggio inspired high school in the community, and the first inquiry-based high school in Midtown. Shelley is excited. “Shortridge has such a rich history of its own, and we’re excited to add to it.” She explains that their approach will be similar to what is going on at the current lab school, but will not be reflected in the name, which will remain the same. Shane O’Day, the current principal of Gambold Preparatory Magnet High School, will be leading the change at Shortridge.

I ask Shelley if there’s anything she wants to share that I forgot to ask. She smiles, then tells a wonderful story about her mentor in college, Jan McCarthy. “Once upon a time there was a professor that believed in a student, and this is what happened. As a dean I try to give that back. It’s my duty to pay it forward, and pay it back.” myips.org/ipsbutlerlabschool

Jen Hammons is a freelance writer based in SoBro.

A version of this article appeared in the April/May issue of the magazine. 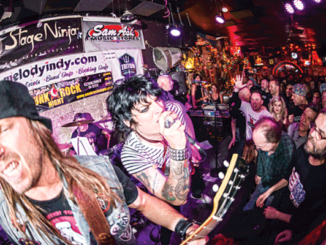