A lot can change in six years.

Six years ago the Martin Luther King Jr. Multi-Service Center had ceased public services and operations for months. Major donors were concerned and reluctant to pledge additional funds. The future of the center’s existence hung in doubt.

Since 2015, however, everything has changed. Staff increased from two part-time to 23 total employees today and the annual budget has grown 800 percent to provide a smorgasbord of social services for area youth, families and adults, reports Executive Director Allison Luthe. She came on board in 2015.

Celebrating 50 years of service, the Center’s mission is “rooted in the values established as a neighborhood leader of individual and family support for area residents: To create a meaningful impact on the lives of those served through quality, multi-generational programs that build community, invest in youth, empower families, advocate for neighbors and provide a peaceful space to connect.”

In May, the United Way of Central Indiana capital committee approved a $1 million grant for phase one of the Center’s building renovation project. This capped a successful $2.2 million capital campaign for a necessary comprehensive overhaul of mechanical systems and related efficiencies in the 1962 building at the corner of West 40th and North Illinois streets. The updates will allow the Center to remain in the heart of Midtown rather than relocate elsewhere.

In addition to new HVAC, electrical system updates and exterior windows replacement, Luthe says a key feature is a new front entrance on 40th Street facing Tarkington Park. “The new entrance will better connect the Center to the park and provide safer entry and exiting of the facility,” she said, noting that the existing main entrance opens right into the driveway. The move also will necessitate a reconfiguration of the first floor to provide more efficient use of space, Luthe added.

Construction to Begin this Summer

Construction is scheduled to begin in August. Davis and Associates, a minority-owned construction company that managed the $125,000 Best Buy Teen Tech Center build-out on the second floor two years ago, serves as construction manager for the project. The United Way of Central Indiana Capital Fund Committee has pledged $1 million for the project, and Luthe says with it they’ve raised 85 percent of costs thus far. The remaining $330,000 is expected to come from smaller donations. “We’ve had to become more efficient at fundraising,” Board member and nearby homeowner Rick Powis said.

Recent funding includes $1.8 million over five years from the Lilly Endowment to provide career learning opportunities and employment services for youth age 12-24. The Center’s non-violence youth programs that were awarded $60,000 in 2018 recently received a boost with a Butler-Tarkington Neighborhood Association Community Grant. “Violence is a great destructive force, and we see its implications right here in our neighborhood,” Luthe said. “Our nonviolence training is important for Butler-Tarkington because it provides our youth and community with peace-seeking conflict resolution and leadership strategies to diminish violence and bring reconciliation among our neighbors, our law enforcement, our community members and our children to forge a brighter future for us all.”

“That’s important growth,” Luthe explained. “If you’re not reading at grade level by 3rd grade, a child almost never catches up.” With the extended funding, the program growth may mean a return to the school itself to service more children there. Luthe and school leadership are currently discussing the possibility.

Additional youth programs feature summer teen employment, the violence-prevention and service learning projects—as well as the Best Buy Teen Tech Center that provides youth hands-on learning with high-technology tools and applications, one of a limited number of such Best Buy-funded Centers throughout the country and the only one in Indiana. “Every kid we serve is better for it,” Board member Powis added. “And, it keeps them safe and off the streets.”

Other MLK Center services include housing assistance, employment and financial coaching, mental health counseling with interns from the nearby Christian Theological Seminary and Midtown-Get-Around transportation service at $2 a ride for area individuals who need a ride to work, school, medical appointment, grocery or the laundromat, Luthe said. It came about through a partnership with IndyGo, and proved especially helpful during the past year because of the pandemic.

During COVID, the MLK Center staff didn’t skip a beat, Luthe said. They distributed more than $1.7 million in emergency assistance, Board President Devin Thomas said at the Jan. 15 virtual Annual MLK Celebration Breakfast. This past March-May, MLK staff members provided 10,000 meals because most food pantries were closed. “While kids were getting meals from school, adults needed food as well,” Luthe said. “We started delivery because some people shouldn’t or couldn’t go out and delivery was as important as the food.”

At the MLK Center, the posted goal is for everyone to have “the opportunity to learn, play, grow and find peace. By embracing the teachings and philosophies of civil rights leader Dr. Martin Luther King Jr., the MLK Center provides vital individual skills and family resources that allow residents in the Mid-North neighborhoods of Indianapolis to grow and enhance their lives. The approach helps people of all ages find — and remain on — their own paths to success and stability.” Dr. King believed that conflicts can be resolved peacefully. In his vision of what he called a Beloved Community, King maintained that conflict ends with reconciliation of adversaries cooperating in a spirit of mutual respect and goodwill. The MLK Center’s mission is to work to make this possible in our culture.

A History of Growth

MLK Center operations actually began at 4155 Boulevard Place in the 1970s as the Butler Tarkington Multi-Service Center, founders report. It relocated in 1977 to a converted house in Tarkington Park then at 3951 N. Illinois St. In 1981 the name changed to the Martin Luther King Jr. Multi-Service Center and expanded the service area beyond the surrounding neighborhood. The Center purchased the building at 3909 N. Meridian St. in 1984, then moved to the current location at 40 W. 40th St. in 1997.

The future of the MLK Center looks promising to Board members, neighbors, service recipients and funders. The capital improvements plan reflects the transformation the Center celebrates with 50 years of service. “All of these programs are growing,” Luthe said.

Go to www.mlkcenterindy.org/building for more information.

Jim Grim is a member of the Great Places 2020 – Butler/Tarkington Neighborhood Education Committee that meets at the MLK Center. He is a Family, School and Neighborhood Engagement team member in the Office of Community Engagement at IUPUI, and has lived in Midtown for 34 years, all but the first 10 years next door to the MLK Center. 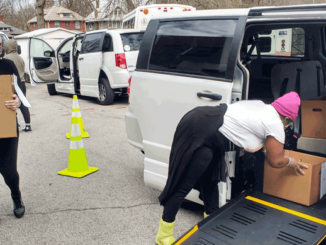