One in a series of posts in support of #Committed to College Ave.

Red Line construction may seem like a terrible anniversary gift for the Next Door American Eatery, but that’s what’s in store as the Indy location celebrates its first year milestone May 1.

As you might expect from a company that does as much as it can to have a low impact on the environment, the restaurant’s operators aren’t complaining about the construction project. “It’s always hard to be patient with construction but ultimately the Red Line will be an asset to our community. We’re embracing the change,” said general manager Aaron Crawford.

It seems necessary to point out that this low-key response to a project that has blocked all vehicle entry points to the restaurant for weeks comes after Crawford had to evacuate the building recently when the construction crew broke a utility pipe. “Thankfully no one was harmed, so it was a good safety drill to practice. It wasn’t scary, but it was a bit surreal because it was so close to us,” he said.

City-supplied signage reminds would-be patrons that the restaurant is indeed open between the piles of rock and yellow construction vehicles, and staff have made an effort to be extra welcoming for those who have braved the obstacles to get in the door. Nearly half of the restaurant’s patrons bike or walk in anyway, which fits nicely with the eatery’s mission of sustainability. “One of the best parts about our location is that we are so accessible by foot, bicycle, and other non-motorized traffic,” Crawford said. “Once the Red Line is complete, it will give our restaurant guests another Earth-friendly way to visit,” he added. “I feel like various transportation options are always beneficial and that a high-frequency rapid transit system will be a wonderful thing … once it’s done.”

Rather than hole up while the holes are popping up all around them, the restaurant is launching what it calls “Partio on the Patio” on May 4 with a “May the Fourth Be With You” theme. 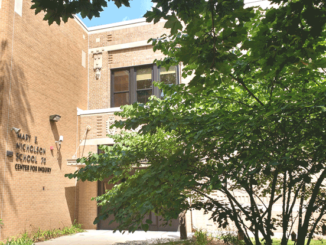 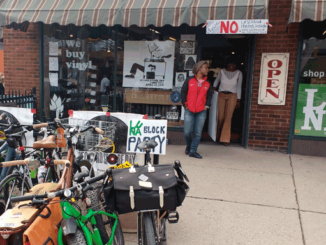 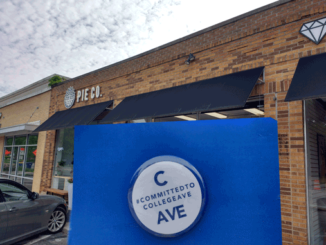