Crown Hill Heritage Foundation takes seriously its stewardship of the natural and built environment encompassed by the 555-acre cemetery listed on the National Register of Historic Places.

“Much of the master plan relates to a study of all historic structures and a plan for prioritizing restoration and in some cases rehabilitation,” he said. With some structures dating to the mid-1800s, building analysis is an important component. But Norwalk said the natural environment is equally important. During the last two years Norwalk said more than 200 trees have been planted in collaboration with Keep Indianapolis Beautiful. This is, in part, to help make up for trees that have been cut. “We are in the process of removing the 300 ash trees that need to come down due to the emerald ash borer,” he said.

Trees and the landscape were crucial elements of the master plan, according to Norwalk’s colleague, Marianne Randjelovic, vice president of development for CHHF. “Our mission statement is: ‘To preserve and celebrate the architectural cultural and natural heritage of Indianapolis’ oldest urban green space, Crown Hill Cemetery,’” she said. “It all comes out of that living mission.”

“One of the top five-year action plan components is to pursue accreditation as a certified arboretum,” she said, adding, “It’s been an evolving sort of natural development based on the great natural beauty of the trees.”

Randjelovic said the arboretum effort has its roots in a 2003 tree inventory project. “We had Purdue University Department of Forestry and the Indiana Department of Natural Resources (DNR) do a tree inventory of the grounds. They identified and marked over 4,000 trees and more than 130 species.”

She said the master plan recommends ArbNet accreditation that was created by the Morton Arboretum in suburban Chicago. The ArbNet website, created in cooperation with the American Public Gardens Association, offers a comprehensive database of arboreta and public gardens. It says the accreditation program seeks to “establish and share a widely recognized set of industry standards for the purpose of unifying the arboretum community.”

As part of the rural cemetery movement design initiative, Randjelovic said Crown Hill was deliberately organized in 1863 to allow people to escape urbanization. “Such cemeteries were the first parks in cities before there were city parks. People could picnic and wander the grounds to get back to nature. This feeds naturally into the whole arboretum initiative that we’re considering today.

“The whole nature and feeling of being in a park with the trees, deer herd, monuments, historic structures—it’s a very enjoyable and valuable experience not only for the families who have loved ones here but also everyone in the city, including visitors,” she said.

Randjelovic said many elements that are required for arboretum certification at Level 1 accreditation are already in place, but two important elements include an updated tree inventory and an arboretum plan. “There will be financial components that are required that will determine eventual accreditation,” she said. The foundation’s board is reviewing the master plan draft, she said, so until it is adopted, there is no timetable for pursuing certification.

Norwalk says focusing on the effort is a welcome relief after a year of often-negative attention because of the controversial location for a Veterans Administration (VA) columbarium in a wooded portion of the property. Local protestors stormed the site earlier this year to prevent preparation work from taking place. After entreaties from Mayor Joe Hogsett and Senator Joe Donnelly, the VA’s National Cemetery Administration (NCA) and Crown Hill Cemetery agreed to swap parcels in May.[PDF] The columbarium is now slated for construction on a 14.74-acre site at the northeast corner of Crown Hill Cemetery, adjacent to the intersection of 42nd and Clarendon. [PDF]

“It’s a win for the community and it’s a win for veterans organizations and families,” Norwalk said. As for the CHHF, he said, “We now have an opportunity to present some of the good things we are doing for the property that are going to sustain it into the future.”

Jessica Schiefer, a Washington, DC–based public affairs officer for the NCA, said an environmental assessment and evaluation of the new site is currently under way and targeted for completion by spring 2018. “The original completed design will now need to be substantially revised and modified for any potential alternate sites under consideration,” she said. Redesign efforts are site-specific, and so not currently under way, she said. Asked about a timetable for accepting the first inurnments she replied, “The project has been substantially delayed and there is no anticipated date available at this time.”

She added, “The National Cemetery Administration will ensure it continues to engage with the community as plans move forward.”

One plan that isn’t moving forward is the desire of some local residents to turn the northwest wooded section of the Crown Hill property into a park. “We are a 501(c)(13) entity, which is a tax category for cemeteries,” Norwalk said. “We are obligated to utilize our land in an appropriate manner for burial and entombment. That land was never public property.”

He said CHHF is focused on seeing the VA project succeed. “Our energies are devoted to assisting the VA with development of the veterans cremation cemetery for veterans and their families. We’re not interested in engaging in a long-term project with anyone else,” he said. “We have to administer the grounds thoughtfully and carefully to ensure the community that we have space 100 years from now.” crownhillhf.org 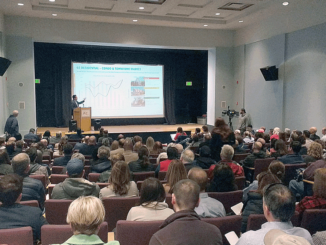 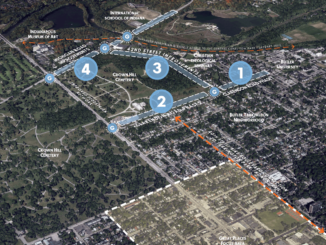