By Christopher Tarvardian and Joe Marra

Butler University is pushing to join the forefront of the collegiate Esports movement with a new 18-credit hour program for an Esports Communication minor and a state-of-the-art 7,500 square foot arena.

The new communication minor will teach students skills in production, business, communication, and marketing which could turn their media passions into a career in the ever-expanding competitive gaming industry. Esports is an organized professional sport that involves multiplayer video game competitions with spectators who view matches either in-person or online.

Before approving the Esports minor, the curriculum committee took more than a year to review the combination of curriculum from the Lacy School of Business and the College of Communications. The 18 credit hour minor was developed after faculty examined similar programs at schools across the country. It includes four core classes and two elective classes with courses varying from Journalism to Marketing.

Interim Director of the School of Journalism & Creative Media and Esports academic lead Lee Farquhar explains the process. “In developing the curriculum we examined what was going on in a lot of other universities — places like Harrisburg University, and Shenandoah University. We stuck with a lot of D-3 types of colleges who were pressing into the Esports space faster than some of the bigger institutions

The Esports minor is being introduced three years after the Esports team was originally introduced to Butler. Currently, the Esports home on Butler’s campus is the former computer lab in Atherton Union, next to Plum Market. However, the University announced recently plans for a new Esports arena on Sunset Avenue near the Chatham Tap. The new 7,500 square foot arena, solely devoted to Esports and technology, will allow Butler’s Esports club to grow. Bryan Rogers, Butler Esports president, hopes the new space will allow for more engagement across the campus. “Most of us inside Esports are just excited for the facility,” he said. “It has been amazing to see this community and following gradually increase in the years since we started.”

While the new state-of-the-art Esports Park will add top-quality facilities for the club and allow them to compete against teams from other schools, it will also add to the student experience at Butler as the facility will include a lounge and café.

Not only will these amenities be available to the campus community, but as Farquhar explains, the park was also designed specifically for use by students within the minor program. “I was really pleased as they were planning it,” he said. “They really put the curriculum and the minor and courses as a high priority of what we need to make sure we have in here so that classes can operate.”

Included in the Esports arena will be classrooms for use by the Esports minor classes, a full production studio, and an entertainment floor for use during the production of an Esports match.

While the competition and curriculum may be closely linked, the Esports minor is far more than just video games according to Farquhar. “The competitive side and the curriculum side will have some overlap. Certainly the minor is not like playing video games. It is the industry and skills around putting on the spectacle entertainment side of it.”

The focus on the Esports minor will be to prepare students for the Esports field after graduation. This is the main reason for the variety of courses available to the students.

The minor will take into consideration the love of gaming that is continually growing across the younger generations, while also tying in the promotion, marketing, and production skill sets which will help students excel and be more marketable in the Esports industry. With the acceleration of interest and recognition in Esports technology and education, Butler hopes the new minor and sports arena will put the university on the map in the collegiate competitive gaming world.

Students across campus are becoming aware of the minor. Kody Leach, a sophomore Sports Media Major said, “The Esports minor is going to be very interesting considering the limited knowledge many people have of Esports. But, I am going to look into it because it might put me ahead of my competitors in the future.” He noted that Esports is a growing industry and a market that has been largely untapped, so for Butler University to take the initiative and get ahead of the curve is rather encouraging. Leach added, “Also the gaming center looks so cool and is going to be an awesome way to attract students to the campus for the future.”

Butler’s College of Communication is hoping that the addition of the minor will prove attractive to prospective students and even students from other majors that have a passion for gaming and Esports. As the gaming industry continues to evolve with a multitude of streaming platforms (YouTube Gaming, Twitch, Mixer, etc.), the addition of the Esports minor and the Esports arena puts Butler University and more importantly the College of Communication in the driver’s seat.

Christopher Tarvardian and Joe Marra are Butler University students enrolled in JR411, Multimedia Newsroom. Their reporting is part of a partnership between the magazine and Butler University. 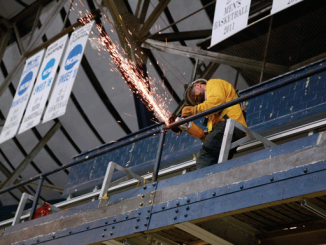