This morning I awoke, took a shower, grabbed my lunch, and left for work. Instead of getting in the car, I took a short jaunt down to 54th Street and College Avenue, purchased a ticket, took a comfortable seat under a canopy, and pulled out my phone to check email while waiting for the bus to arrive. During the ride downtown I was able to get some work done on my laptop using onboard Wi-Fi. The bus was swift, stopped only a few times, and even passed cars at stoplights along the way.

Sound like a great way to ride the bus in Midtown, or more like a dream? It could become a reality if a plan under consideration by the Indianapolis Metropolitan Planning Organization (MPO) is adopted. Details of the plan were outlined at a recent meeting of the Green Line Citizens Advisory Committee, part of Indy Connect, Central Indiana’s Transportation Initiative. Indy Connect is a partnership of the MPO, the Central Indiana Regional Transportation Authority, and IndyGo dedicated to providing Central Indiana residents with transportation options in support of the future development of our region. Indy Connect’s studies focus on three new Bus Rapid Transit (BRT) lines through Midtown, including the bus of my dreams.

Dubbed the Red Line, this north-south line would include multiple stops along College Avenue, 38th Street, and Meridian Street. The 25-mile-long line would connect Carmel to Greenwood via Midtown and downtown Indianapolis, putting riders within reach of jobs, homes, and many of the hot spots and watering holes throughout the district. Extended hours of operation beyond current IndyGo services would be an added inducement to leave the car behind.

BRT’s main advantage over conventional bus service’s more-frequent stops is its quick travel time between dedicated stations spaced at half-mile or 1-mile intervals instead of every block. According to draft plans, service at the new Red Line stations could be as frequent as every 7.5 minutes during rush hour or every 15 minutes during off-peak hours—twice as frequent as the IndyGo 17, which arrives at 30-minute intervals, or the IndyGo 18, at 1-hour intervals. The Red Line would also operate later, allowing riders to use public transit beyond 10 p.m.

Riders would purchase tickets from a self-serve kiosk at the station, which would feature covered waiting areas, digital screens with real-time arrival information, and a design contextually sensitive to the neighborhood. MPO reports that BRT’s reliability, convenience, and flexibility makes it a low-cost alternative to fixed-rail systems such as trolleys and light rail.

Although the Red Line is the only funded study so far, it isn’t the only BRT service planned for central Indiana. Working under the umbrella of Indy Connect, the MPO has two other BRT routes planned for Midtown neighborhoods. The Yellow Line would serve the Keystone Avenue corridor, and the crosstown Purple Line would run on 38th Street from Fort Harrison to Lafayette Square. Although the Yellow and Purple lines are still in development, they would offer increased access to community hubs such as the State Fairgounds, The Children’s Museum, Indianapolis Museum of Art, and Ivy Tech Community College, with more frequent service compared to current schedules.

Imagine the day when you will be able to hop on the Red Line after dinner in Broad Ripple and transfer to a Purple Line bus headed for the IMA. If you work near Glendale and have an evening class at Ivy Tech, don’t sweat the fight for parking on campus; take the Yellow Line. Today, mobility without a car is limited by infrequent bus service. Tomorrow, the Red, Yellow, and Purple lines will give us more options to move through Midtown.

While the outlook for mass transit in Indianapolis has been cloudy for a long time, the future could be bright for Midtown residents!

Since a version of this article appeared in the August-September 2013 issue of the print edition, Curtis Ailes relocated from Keystone-Monon neighborhood to Seattle, WA where he is the streetcar operations manager for the City of Seattle. 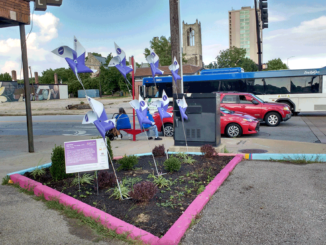 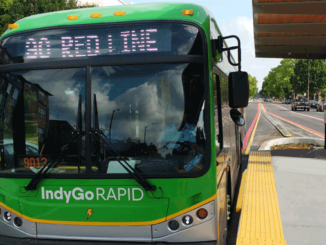