Development, redevelopment, in-fill, preservation: these terms express how cities change and how they remain, how they look and how they work. Midtown neighborhoods continue to see existing commercial and residential structures modified or demolished and replaced with contemporary designs of sometimes incompatible uses.

Since the loss of old structures has aesthetic, cultural, and historic impacts that should be considered before demolition occurs on a redevelopment project, it’s worth a backward glance at some effects of demolition on redevelopment.

Long before journalist and famed urban activist Jane Jacobs took on city planners in her 1961 book The Death and Life of Great American Cities, U.S. municipalities sought to control development and redevelopment. Indianapolis has controlled development to some extent since at least 1905, when the new Common Council drafted ordinances aimed at creating a separation between industrial zones and residential ones for newly platted areas. The city enacted its first zoning ordinance in 1922, but the controls it put in place were primarily for new development and aimed at keeping separate zones of use: residential, commercial, industrial.

Although redevelopment is bound by the same zoning ordinances as new development, the former also bears the weight, not always successfully, of replacing the familiar with the new. In Indianapolis, redevelopment in particular has been something of a mixed bag, often resulting in losses of significant historic buildings in favor of bland new structures that added neither improvements nor architectural significance to their neighborhoods.

One example of a disappointing redevelopment still raises the ire of Indianapolis preservationists: The loss of an incredible Art Deco masterpiece, the 1930 MaCo Building. Designed by one of Indianapolis’s best-known architecture firms, Pierre and Wright, and named for its location on the southeast corner of Maple Road (38th St.) and College Avenue, the anchor tenant was Walgreen Drugs.

At the time the building was razed in 1992, a young employee of Historic Landmarks (now Indiana Landmarks), Kipp Normand, objected to the plan for demolition and redevelopment proposed by—ironically—Walgreens. Landmarks had plans and renderings that showed how redevelopment could happen within the historic building and presented those to neighborhood groups and the City-County Council, which had to agree to a variance of development standards for the drugstore’s plan. But neighbors didn’t see the promise that Normand did in the boarded-up MaCo Building. The Mapleton-Fall Creek Neighborhood Association supported the petition, believing that the promised new “suburban-style” (strip mall-style) Walgreens would elevate the neighborhood, according to coverage in the Indianapolis News and in minutes from the City-County Council meeting. [http://journals.iupui.edu/index.php/ccci/article/viewFile/14705/14873. The proposal for rezoning is on page 110. ]

An estimated $1 million investment brought down the limestone MaCo and replaced it with a suburban-style Walgreens. According to Normand, today a Meridan-Kessler neighborhood resident and ardent preservationist, the new owners said they were honoring preservationists by removing some of the carved Art Deco panels from the building and placing them in what Normand termed “a terrible stucco wall around the parking lot.”

However, that redevelopment did not reenergize the neighborhood. Instead, the new Walgreens closed just a few years later. Today, the wall surrounds a parking lot for a pair of dollar stores.

Is it possible that redevelopment of the historic building could have succeeded where the new Walgreens failed? Yes. For residents, developers, and activists, the MaCo could serve as a cautionary tale. Has it? No.

A few blocks away, at 40th and Meridian streets, another historic building was demolished a few years ago. In October 2011, the City of Indianapolis parks department demolished the Tarkington Park tennis shelter, a minimalist 1957 glass curtain wall building designed by Edward Pierre, one of the MaCo architects. When preservationists once again raised objections, this time sadly after the fact, the parks department claimed not to have known that it was a Pierre design.

But the ensuing ruckus, led primarily by Vess Ruhtenberg, a member of Indiana Landmarks’ Indiana Modern group, garnered quite a bit of press. The parks department’s new café, slated to open this summer, looks more than a little bit like the former Pierre-designed building with an added canopy. The new building was sited a little south of the original, away from the neighbors at Tarkington Tower, some of whom had complained about questionable activity at the old building. Buildings, however, don’t create illicit behavior; they merely house it. New buildings and old buildings provide the same shelter for human activity, both positive and negative. Lighting, landscaping, and activity are changes that can turn an old existing eyesore back into a neighborhood asset.

Such solutions are often overlooked in favor of scraping away the old to make room for something that will be bright and shiny, at least temporarily. The new café building by Rundell Ernstberger is now surrounded by an inviting park redesign by the same firm. Already activity has increased. But was the demolition of the historic building a necessary component to the success of this redevelopment? Buildings are easily moved and the Pierre structure was small. Would the redesigned park have succeeded in drawing people with a moved and gussied-up or even not moved and just gussied-up original tennis shelter? Can a new structure have the same architectural impact as a historic one? Of course these are questions that can’t be answered until history gives us perspective on the new developments.

IS DEMOLITION EVER OK?

There may be projects in the Midtown area that justify demolition in favor of redevelopment. The proposed redevelopment of the AT&T site on College just south of Kessler is ripe with the conundrums of redevelopment. In this case, the existing mid-century office building on the site probably wouldn’t be considered of architectural or cultural importance in the surrounding residential neighborhoods largely populated with 20th-century Craftsman and revival-style housing. Recognizing that any replacement structure will impact the built environment of the area well beyond the lifetimes of the current residents, the development team at Milhaus and Ratio Architects held numerous meetings with neighbors to discuss materials, setbacks, and design elements that could complement the area. While the proposed redevelopment received approval from the Metropolitan Development Commission (MDC), some adjacent neighbors have rejected the proposal and filed suit, challenging the MDC’s approval of variances largely on the issue of the density and height of the multi-story complex. [PDF]

Neighborhood land-use veterans are aware that aesthetic criticisms are valid only in registered Historic Districts. However, the Secretary of the Interior offers useful guidelines for new construction that might be helpful when considering developments in a mature district like Midtown. Although they are written to apply to individual buildings, these guidelines generally suggest that new construction look new—a contemporary design is preferable to a fake historic one—and new designs should be comparable to the existing in terms of design, materials, siting, and workmanship.

Activist Jane Jacobs, whose 100th birthday anniversary was celebrated by urbanists across the country in 2016, wrote, “Cities need old buildings so badly it is probably impossible for vigorous streets and districts to grow without them.” Let’s hope Indianapolis developers, citizens, and regulatory bodies will choose carefully when it comes to replacing the old with the new.

Historian Connie Zeigler is a consultant who writes frequently about historic preservation issues. Her website is cresourcesinc.com. 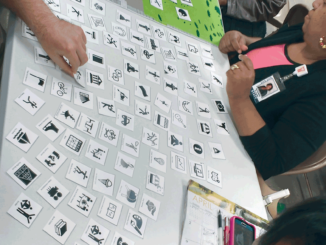 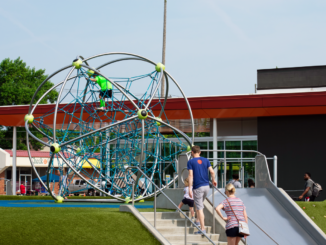 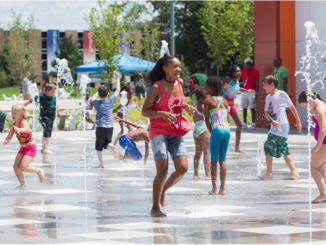