In August, Mayor Joe Hogsett announced the selection of 25 Indianapolis high school students to serve on the Mayor’s Youth Leadership Council, an initiative to cultivate the next generation of leaders. “This group of talented and versatile students will have a role in making Indianapolis a safer, stronger, and more welcoming city,” Mayor Hogsett said. The Council is made possible by the Lilly Endowment, The Indianapolis Foundation (a CICF affiliate), Leadership Indianapolis, and the Marion County Commission on Youth (MCCOY).

Indy Midtown Magazine reached out to two Council members from Midtown and asked them to share their thoughts on the project.

On April 18 I got an email from my school counselor with the subject line “Mayor’s Youth Leadership Council Positions.” I clicked on the email without hesitation. I had no idea what the lengthy title of the organization meant, but a chance to learn more about government and meet other passionate, intelligent kids seemed promising. 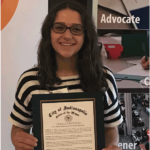 I have had an interest in politics since fifth grade when I did my first research project. I chose to research women’s rights, and suddenly became aware of the lack of financial independence that many women have as well as the need for more women in politics. This was the moment that I realized the importance of putting more women in positions of power. Ever since then I have had an interest in social justice and politics. During eighth and ninth grades, I participated in Rep. Susan Brooks’ youth council. Since high school started, I have been in a social justice club where we discuss current events, politics, and human rights abuses. Applying for Mayor Hogsett’s Youth Leadership Council seemed like a way to see if I could turn my interests into action. It was an opportunity to learn more about the city I have lived in my whole life and I could not turn it down.

The Council meets one Saturday a month in the Mayor’s office on the 25th floor of the City-County Building. From that room you can see out over almost all of downtown. For me, one of the most incredible moments so far on the Council has been hearing about developments around Indy and literally looking out and seeing the city be built up. It is true in every field, from business to personal development, that if you’re not growing you’re dying, and it is amazing to see from that window all the ways that our city is growing.

During the meetings we often hear from experts, like nonprofit directors or law enforcement officers, about the topics we are discussing. Mayor Hogsett will come listen to the discussions, but never guide them. The adults who direct the program let us speak freely and ask any questions we want. Also, they are really looking to us for suggestions on what the Council should be like, since this is the inaugural year. They have taught us about respectful, productive communication and encouraged us to hold “listening sessions” so that we can share not only our own voices, but the voices of entire communities (i.e., our schools) at meetings. In addition to our monthly meetings we will soon be having sub-committee meetings. Members of the council will be handling research for meetings, social media accounts, planning field trips, facilitating discussion and introducing speakers at meetings, and of course sharing the opportunity with possible new members.

I’ve lived in Indianapolis my whole life but only in the past couple months since joining the council have I seen that no two people who live in this city have the exact same experiences. Over the next year I hope to learn more about the struggles that different communities, schools, neighborhoods, places of worship, and businesses are facing in Indianapolis. I also want to learn what my peers love about Indy. Through collaboration, our group should be able to develop solutions to strengthen the parts we love about Marion County and tackle the issues that are keeping our city from moving forward. To summarize, my goal is to learn from my peers. I believe understanding is the only thing that leads us to progress.

Sophia Pantzer attends the International School of Indiana. A version of this article appeared in the October/November 2018 issue of the magazine. 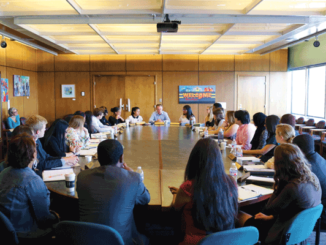