In an effort to complete the southern reach of the Indianapolis North Flood Damage Reduction Project, the City of Indianapolis Department of Public Works (DPW) initiated a feasibility analysis in Spring 2015 of the proposed Canal West Bank levee alignment alternative. The analysis will include topographic survey, geotechnical analysis, wetlands delineation, and structural analysis to determine the feasibility for the proposed alignment. The study is expected to be complete by summer 2015, and will be coordinated by the Army Corps of Engineers, DPW, and Citizens Energy Group. The analysis will also require the closure of the Central Canal Towpath beginning in February for the completion of soil borings along the trail. The City estimates that the towpath could be closed for as many as 30 days, depending on weather. Towpath users should follow the designated detour during the closure, which will be clearly marked with signs. 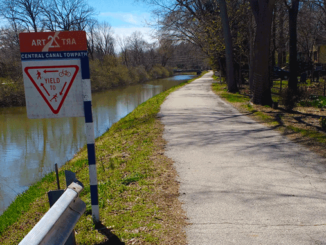