During 2019, Indy Parks continued to make progress in implementing the Broad Ripple Park master plan. Adopted in 2018 as the guiding document for the 62-acre signature park, the plan benefitted from significant public outreach and input.

After five months of construction, the park’s popular dog park reopened in August. The $600,000 makeover expanded the facility’s paw print to nearly 2 acres. This quick-win of a high-priority project from the plan demonstrated that disruptive change can actually result in substantial improvements to public facilities.

In January, the City of Indianapolis issued a Request for Proposals (RFP) for development of a new community center—another high priority project in the plan. Given Indy Parks’ limited capital budget, City officials determined that a partnership with a private firm was necessary.

The current community center was built in 1983 for use as a library and updated in 2003. The 11,000-square-foot structure is nearing the end of its useful life and requires substantial maintenance. Even if the City could afford the cost of repairs, space would be inadequate for parks staff and participants in all of the popular programs and events.

A review committee comprised of City staff and community representatives from the BRVA and the Friends of Broad Ripple Park reviewed responses to the RFP. Three firms were interviewed. The committee recommended that the City select BR Health Holdings LLC—a partnership of Community Health Network and Avenue Development—as its partner in April.

A November public open house at the park included renderings for the new community center. Community Health Network representatives noted that the healthcare facility has had a presence in Broad Ripple for 24 years but was looking for additional space to expand wellness and healthcare offerings. “We’re not looking to change the integrity of the park.”

While the designs shown at the open house were preliminary, Prazeau said that the facility would total 40,000 square feet. Community Health would use 15,000 square feet with the remainder for Indy Parks and some shared multi-use spaces.

Besides accommodating Community’s medical offices, proposed features include a gymnasium, running track, multi-purpose rooms, lockers, and a café with an outdoor terrace facing the White River. “Connecting with the river was very important to the community,” Prazeau noted.

To that end, the design is flexible enough to permit a pair of connections to the proposed Broad Ripple RiverWalk: one adjacent to the riverbanks and one along Broad Ripple Avenue.

Prazeau said the development team is analyzing current erosion patterns along the site’s banks with an eye toward stabilization and revegetation. This aligns with the community’s long-term vision for the river as articulated in the park plan and the White River focus plan.

Some trees will be affected by construction—along the riverbanks and on the main site. Ash trees must be removed along with trees near a power line, Prazeau said, but he promised that ample landscaping would be included in the final build-out.

The existing boat ramp might see some closures during construction but will remain in its present location. A 60-inch storm sewer drainage pipe runs through the site, and Prazeau said the developers have agreed to work around it. This necessitated adjusting the placement of the new structure on the site. As specified by Indy Parks, the pool and bathhouse will remain untouched.

The design takes advantage of the sloping site geography to keep the height modest, open up river vistas, and achieve energy efficiencies from backfill providing insulating mass. At street level, the Broad Ripple Avenue elevation will be approximately 17 feet.

An aggressive timeline has been proposed, with construction slated to begin in the second quarter of 2020. The facility is slated to be ready for use in one year. While the development partner assumes responsibility for the projected $19.65 million cost, the City maintains ownership of the land in perpetuity and retains the right to purchase the structure at some future date.

Since the 2.2-acre site was zoned for special use as a library, the Department of Metropolitan Development (DMD) needed the Metropolitan Development Commission’s approval to rezone it to PK-1, a park use. At the Sept. 18 hearing, Jeff Hasser, DMD’s  administrator for real estate and economic development, testified that rezoning the land would be consistent with the PK-1 zoning for the rest of the park. Though pressed by Commission members, he declined to speculate on the particulars of the project as the City was still in the process of negotiating a project agreement with the development team. The MDC ultimately voted in favor of the petition.

In the supportive report for the petition, DMD current planning staff noted that PK-1 is a plan development district: “No use, building, or structure is permitted for any purpose until a site and development plan for such land, including the proposed use or uses, has been filed with and approved by the Commission in accordance with the Zoning Ordinance.”

To advance the project, DMD director Emily Mack said her team has filed a variance of use request. “While park use will be the primary land use, to be able to add subordinate and ancillary healthcare use requires a variance,” she said. “We have to insure this project meets all City regulations, so we have to go through the process like anyone else.”

DMD’s Hasser confirmed that BR Health Holdings has submitted an approval petition for the overall development and a variance of use for the ancillary healthcare facility within the parks center. “The City is committed to working with BR Health to deliver a facility that matches the neighborhood vision as outlined through the master planning process,” he said. The variance petition has been placed on the agenda for the MDC’s February 5 meeting.

Indy Parks director Linda Broadfoot confirmed that an additional public open house would be held once comments from the November open house were processed. 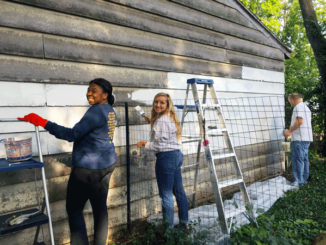 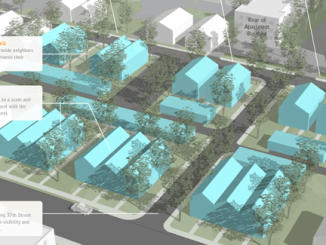