Reconnecting to Our Waterways (ROW) flows from an Eli Lilly and Company strategic initiative on resources, investment, and overall long-term impact through its Global Day of Service. In Indianapolis, the event brings 8,000 Lilly employees together to work on community service projects one day in October. Around the same time as the 2010 Day of Service, the Central Indiana Community Foundation (CICF) hosted the CEOs for Cities National Livability Challenge, which proposed 10 big quality-of-life concepts every American city should consider. Quality of life was defined as creating access to art, nature, and beauty every day for everybody. “Reconnecting to our waterways” was one of the 10 big concepts.

Since then ROW has attracted widespread support from the city’s key community institutions. With Lilly and CICF in the lead, The Children’s Museum, Ball State University, the Butler University Center for Urban Ecology, Citizens Energy Group, the City of Indianapolis Office of Sustainability, and Keep Indianapolis Beautiful have collaborated to generate a framework for engaging the broader community in quality-of-life projects connected to our city’s natural assets. The popularity of ROW is comparable to what the City accomplished for the 2012 Super Bowl: mobilizing massive community goodwill and talents for a spectacular goal.

The community collaboration took the form of a collective impact—a framework for convening a wide variety of institutions, businesses, city and community leaders, artists, and neighborhoods to create productive partnerships for the purposes of achieving common goals. A collective impact has been called “collaboration on steroids” and proven effective nationwide for large-scale social change. ROW’s collective impact includes a centralized infrastructure, dedicated staff, and structured process.

ROW is focused on seven specific neighborhoods within a 10-minute walk or 20-minute bike ride of the city’s six major waterways:

ROW is also focused on holistic solutions that integrate six related elements: Aesthetics, connectivity, ecology, economics, education, and well-being. Each element has a taskforce to identify and support projects connected to each waterway.

Since its inception, ROW’s framework, plans, and metrics have formed a natural extension of neighborhoods’ fully developed quality-of-life plans. Now in its third year, ROW has secured a significant grant through the Kresge Foundation that allows the organization to actively seek and fund creative placemaking projects in areas of Indianapolis with the greatest need. ROW’s Steering Committee accepted the first round of grant applications in May; the next opportunity opens in October. Anyone seeking to receive a Kresge-funded grant for a creative placemaking project should work with that respective ROW waterway committee first. (Visit reconnectingtoourwaterways.org for more information about the Kresge grant.)

One of six ROW waterways, the Indiana Central Canal is the only human-constructed one; it was built between 1836 and 1839 and is now an important source of the Indianapolis water supply. The Canal is also unique in three distinct ways:

Areas along the Central Canal have already been the subject of many planning studies resulting in plans for art, beautification, scientific study, and neighborhood revitalization. In Broad Ripple, the Canal Esplanade project represents a reinvention of the waterway throughout the Village center, with a mixed-use neighborhood that includes contemporary housing, shopping, and nightlife. Art2Art is a recreational trail between Broad Ripple and Butler University that connects the Indianapolis Art Center to the Indianapolis Museum of Art. Christian Theological Seminary’s Spiritual Trail will enhance an area few people know about that overlooks two waterways, the Canal and White River. Butler University’s Indianapolis/City as a Living Laboratory (iCALL) project merges science with art in public programs along those same waterways. The Burdsal Parkway Connection will convert an unused area for outdoor recreation, create gateways to the Canal and the Fall Creek greenway, and spur redevelopment in the Riverside neighborhood.

These are just a few of the projects already planned. The Canal Waterway Committee received $94,000 to fund habitat restoration and clean up, programming and public art as well as a community connection program. This committee will also use the funding to employ local youth to remove invasive plants in the area.

This ROW waterway defines Midtown’s southern edge and has seen lots of activity in 2016. Read about the successes at Destination Fall Creek  here. The Delaware Gateway has been redesigned as a greenspace and community gathering area thanks in part to a $72,750 grant from ROW made possible by the Kresge Foundation and the Central Indiana Community Foundation (CICF) – for creative placemaking projects and programming along ROW waterways. The grant will help fund two art installations: 1) the Silver Falls art installation – an iconic sculpture designed by Rocky Ripple resident Scott Westphal to be installed in the Delaware Gateway in 2017 and 2) Fall Creek Canvas artwork that will adorn the 29th @ Central residential project slated to break ground in 2017.

One Midtown-based ROW project has connections to all six ROW waterways:  StreamLines. Made possible by a four-year $2.9 million grant from the National Science Foundation to the Center for Urban Ecology at Butler University, StreamLines is an interactive, place-based project that merges the sciences and the arts to advance the community’s understanding and appreciation of Indianapolis’ waterways. It is modeled on the City as Living Laboratory‘s framework that creates situations to explore the intersection of art and science in our lives. Environmental installations created by New York-based artist Mary Miss are located in each waterway.

The creative talents of our diverse community are needed to make ROW a success. For more information and to become a volunteer, visit the ROW website. 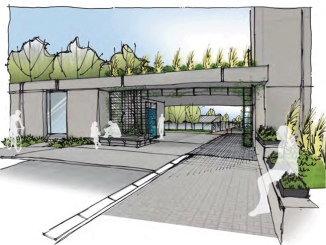 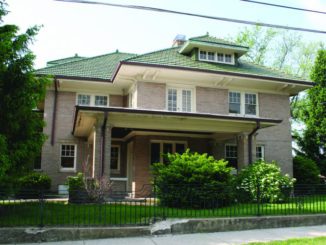