The American Civil War was still raging and President Abraham Lincoln was seeking his second term in 1864 when the Indianapolis High School opened in a former elementary school building downtown. The city’s first attempt at a free public high school, in 1853, fizzled for lack of funding, but the new high school was a great success and quickly ran out of space.

After a series of relocations to larger and more appropriate buildings, the high school landed in 1885 on what is now the location of the Minton-Capehart Federal Building. In 1895, when enrollment again exceeded capacity, a second high school was created, and the city needed a new name for the first one. Indianapolis High School became Shortridge High School in 1896, named for the city’s first school superintendent.

As the city expanded, Indianapolis residents moved north from downtown. The city decided to move Shortridge in 1928 into what is now Midtown’s Mapleton-Fall Creek neighborhood, at 3401 N. Meridian St., where the school still stands today.

At the time, the address was among the most coveted in the city. Neighbors included a former U.S. vice president, at least one millionaire, huge Gothic churches, and Tudor and Colonial Revival mansions and luxury apartments.

In the 90 years since then, Shortridge students have reacted to Prohibition, several wars, the civil rights movement, and the rise of the digital age. The school has produced a litany of luminaries in academia, fine arts, sports, engineering, the military, and politics. It has been a high school, a middle school, a high school again, and for the past four years one of the city’s three high schools to offer an International Baccalaureate (IB) diploma.

“Shortridge has weathered a lot of truly historic societal and economic shifts,” says principal Shane O’Day, who came to Indiana seven years ago to launch Gambold Preparatory Magnet High School, which along with its IB program was relocated to Shortridge in 2014.

Students today may feel like they’re in the midst of another seismic shift.

O’Day, who had handpicked his original staff, added about 60 new teachers to accommodate the larger student body. He added dance, sculpture, and photography classes and expanded already offered music and theater classes.

When word filtered down that high schools would close, Shortridge students were alarmed, thinking that because of their school’s small enrollment, Shortridge was likely to be among those to go. Relieved when they learned Shortridge would remain, junior Dale Cheney said students were ready to be as welcoming as possible to their new classmates. They were optimistic.

ROLLING OUT THE WELCOME MAT

Kaycee Allison, a senior transfer student from Broad Ripple High School, wasn’t surprised by the orientation outburst. Nor was she surprised that the Shortridge students were rolling out the welcome mat because caring and respect are a big part of the IB core values. She knows the IB program because she is a K–8 alumna of Indianapolis Public Schools’ Center for Inquiry 2, which also follows the program. “I didn’t think it would be one big, happy family. Most of the transfer students had chosen magnet schools instead of IB and were unhappy to lose them,” she said. “The different groups have kind of been self-segregating, but we’re slowly starting to interact. I think it will get better.”

Allison had purposefully stepped away from the IB program for high school. “I was really happy to go to Broad Ripple,” she said even as she admitted that she believes she’ll have a more rigorous and structured education at Shortridge. “We have a Futures Center that’s helping us work through the college application process and the teachers are really helpful.”

Cheney, an IB student since kindergarten, chose Shortridge in part because of the process she was used to and also because it was small. Despite making the choice on her own, she admits that she cried on the way home the first day because she had not yet made any friends and felt out of place. She followed her mother’s advice and talked to a teacher about her concerns.

Before long, Cheney had shed her insecurities and shyness. She empathizes with the transfer students who are struggling with the loss of their high schools, a numerical instead of letter grading system, or any of the host of other issues that come with high school.

Sandy Halsmer, a senior who transferred from Broad Ripple last year, has a foot in both camps of the original Shortridge students and the transfer students, and sees both sides of the angst. “From my perspective, it’s going well,” she said. “If there’s segregation, it’s mostly because transfer students are largely in the same classes because they can’t step fully into IB at this point.”

Halsmer and Allison are on the volleyball team together. “I wouldn’t really see her otherwise because we don’t have the same classes, but it’s been great to have so many more people available for sports,” Halsmer said. “It’s really given us a good opportunity to bond.”

O’Day is comfortable with the pace of the students’ response to change and confident that most students will have a good year. “As in any school, we face challenges. But we continually focus on values like kindness, integrity, and character as we ensure an environment of inclusion and support for all learners,” he said.

For most people, change is difficult. But working through change is a good life lesson. And, he points out, “All of our students are going to leave here and go on to something else—college, the military, or careers.”

Halsmer, the student who transferred last year, said she knew she was in for a bigger challenge academically but that it was something that would benefit her. “It’s a good school. They push you hard to succeed,” she said.

O’Day encourages anyone who’s curious about to visit the school and talk with students and teachers to understand the culture and what’s demanded of every student.

The IB program is designed to prepare students to be world citizens. Course work is college-level and challenges students to consider the long-term global implications of the subject matter. It’s different from the more common Advanced Placement programs, which offer classes on an à la carte basis. Earning an IB diploma requires six interdisciplinary courses, a research paper, and community service.

Even after four years of working in the historic building, O’Day admits he is still awed by the structure. Architectural Digest named the Classic Revival building the state’s most beautiful public high school. It’s counted among the U.S. National Register of Historic Places.

But it’s not the age of the walls or the bricks or even its architectural beauty that make Shortridge hallowed ground. The most important contribution the school makes now is the same as it’s always been: the students it produces.

Relatively speaking, the IB program is new for the historic building. It’s designed for students to look at the world with a global view, to consider environmental and societal outcomes reflexively, almost as muscle memory. Right now, that approach is helping Shortridge through another transition period. And there is every reason for optimism.

“We’re really a tight-knit community, and that includes every one of us,” Cheney said. “There’s room for everyone in the big heart of Shortridge.”

Cheryl Reed is a freelance writer who lives in the Canterbury neighborhood. 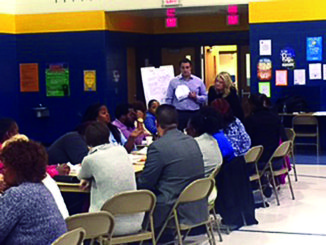