When I got the idea of writing Under the Apple Tree, a novel based on a boy growing up during World War II, using the experiences of a kid about the age I was during that era, I decided to make up a fictional town called Birney, Illinois.

Those who knew me in my childhood and pre-adolescent years did not have a hard time figuring out that many of the places and scenes that I used to describe Birney were drawn from my time as a boy in Broad Ripple. This was in the days when Broad Ripple was simply a neighborhood, rather than a village. I lived at 6129 Winthrop and walked half a block up the street to my beloved School 80 (the Frances E. Willard Elementary School) for eight years.

I was in the very first class of 1st-graders taught by Roxie Lingle Day, who 42 years later attended my mother’s funeral. In the summer after my freshman year in college I drove with a friend to California, and stopped in Carmel-by-the-Sea to visit my retired 8th-grade teacher, Louise K. Wheeler, who first encouraged my writing. She served my friend and me tea, as befit a good English teacher.

In the novel, the story is seen through the eyes of Artie Garber, whose father runs the local gas station on Main Street in Birney. In those days, what is now called Broad Ripple Avenue was simply called 63rd Street, and I thought of it as my Main Street. At the corner of 63rd Street and Winthrop was Gene’s Pure Oil Station, owned by Gene Pursel, whose sons Jack and Dick both played on the line for the Broad Ripple High School football team. The book character Joe Garber was a friendly guy, like Gene. Men and boys liked to hang out at Gene’s gas station, and in the book Artie and his buddies hung out at Joe’s in hopes of seeing some of the high school stars who dropped by to talk and eat peanuts they bought from the penny machine on the counter inside the store, just like we did.

Artie and his pals also liked to hang out at Damon’s Drugs, a fictional version of Lobraico’s Drugstore at the corner of Westfield Boulevard and Guilford Avenue. There was a Hook’s Drugstore where Brothers is now on the corner of Guilford and Broad Ripple Avenue, but it was one of a chain of stores in the city and Lobraico’s was more family-friendly. It was owned by one family and lasted longer, I believe, than any of the other old Broad Ripple institutions. They had tables and the old-fashioned metal-back chairs like the ones at the Harbison’s drugstore at 16th and Central where my father was a pharmacist (he bought that store from my Harbison uncles and named it Wakefield’s when I was in high school). My father took my mother and me to Lobraico’s and bought me a hot fudge sundae to celebrate my graduating from Cub Scouts to Boy Scouts.

Like Artie in the novel, I went to the record store called The White House on 63rd Street between Winthrop and Guilford to buy the patriotic 78 rpm records that I played on the wind-up Victrola in the basement—songs like “Goodbye Mama, I’m Off to Yokohama, for the Red White and Blue, My Country and You” and “We’ll Heil (pffft) Heil (pffft) Right in Der Führer’s Face!” Only when I asked online if anyone remembered the store and/or the name of the pretty high school girl who worked there did I learn from John Hague (father of Alan Hague, who publishes the Broad Ripple Gazette) that “I don’t remember her, but I vividly remember Jack White, who owned the store. He would occasionally remind people: ‘This isn’t a museum where you just come in and look around. This is a store where you actually buy things!’ Jack was a delightful person.” We both remembered there was a booth you could go in and play the record to decide whether you wanted to buy it.

Further down on the south side of 63rd Street was a Danner’s dime store and Vonnegut’s Hardware. You didn’t have to get in a car and drive to some hideous mall to get everything you needed; it was all in one walkable neighborhood. During the decade I lived on Winthrop, the only crime I ever heard about was a boy stealing a Big Little Book from the dime store. (Big Little Books only cost a dime, and were books a kid could hold in his hands, usually an adventure story, bound by stiff cardboard, with a captioned illustration opposite each page of text.) We were lucky to be alive then. No one had to lock their doors.

Every Saturday the neighborhood kids walked to the movies at The Bijou in the novel, where Artie’s older brother’s girlfriend, Shirley, worked in the ticket booth. The Bijou, of course, was The Vogue, which was strictly a movie house back then. On Saturday you went around noon or one o’clock in the afternoon and saw a cartoon, a newsreel, a serial (Buck Rogers, maybe, or Flash Gordon, or a cowboy western) After that came the double feature: two full-length movies, the big feature films of the day, with stars like Clark Gable, James Cagney, Humphrey Bogart, Judy Garland, Betty Grable, and Barbara Stanwyck. I remember going into the Vogue when it was a bright day and coming out, slightly dizzy but fully satisfied, into the early dark. It was a week’s entertainment packed into one afternoon.

When I first moved back to the neighborhood I was walking down Carrollton and saw the huge sign on the back wall of The Vogue that reads “Established 1938.” I stopped in my tracks, as I realized I must have seen one of the first movies ever shown at The Vogue! For my sixth birthday party in 1938, after ice cream and cake, my cousin Junior (Clayton E. Ridge Jr.), who lived next door in our double on Winthrop with my Grandma Irene Ridge (Ireney), took me and my first-grade friends to the movie at The Vogue, much to his chagrin as a 13-year-old who had to lead a bunch of little kids around. I remember that two years later, Junior and I saw Errol Flynn in The Dawn Patrol at The Vogue, and came home to play dueling warplanes in Ireney’s living room, much to her distress.

I’m an only child, but for the years he lived next door with Ireney, Junior served as my older brother figure, in ways that both pleased and annoyed me (exactly like older brothers do!). He was not a Marine, like Roy in the novel, but served in the 8th Air Force as a tail gunner on a B-17. There was a boy down the block who joined the Marines, and I imagined him as Roy, though I knew nothing about him, so I threw in some of Junior’s colorful persona, and even used a line of his dialogue. Early in the novel, when Roy wants to get out of the house to go with his buddies to see the stripper Bubbles La Mode, he uses the ruse of taking Artie out, and when the parents give grudging permission to go, Roy says: “We’re off—like a herd of turtles in a snowstorm!” I stole that line straight from Junior—I can still hear his voice as I write it.

What is now the Broad Ripple United Methodist Church at 62nd and Guilford, across from the condominiums that were once School 80, in my childhood was the Broad Ripple Christian Church, an offshoot of the Baptists, complete with a baptismal font for full-immersion dunkings. It was my personal choice at age 11 to be baptized in that method, feeling that the sprinkling my parents had got me as a baby, from the First Presbyterian Church downtown, was not enough to do the job. I wrote up the full experience in my memoir Returning: A Spiritual Journey, but I couldn’t remember the real name of the tall, thin, serious minister who performed the rite. He must have been at the church only a short time—maybe he was an interim pastor—because I remember more clearly the Reverend High Gillette, a short, stocky, often laughing man, whose daughter Nancy was a classmate. Rev. Gillette entertained kids from School 80 on Wednesdays with hamburgers at lunch for a small fee, along with a film serial. The burgers weren’t as good as the ones at Wally’s Grille next to Gene’s Pure Oil Station, but the serials were fun and we all cut up and were rowdy, letting off steam from an arithmetic class (a curtain came down in my mind after long division). It was rumored that when Rev. Gillette left the church, he and his family moved to a farm in Wisconsin, and visitors were greeted by a sign that said “Done Preachin’.” But not done having fun.

Those days were blessed. You think we weren’t special? Listen to this: one day Roy Rogers, the singing cowboy, came to town with his horse Trigger. Roy Rogers and Trigger came in person to The Vogue after a Saturday matinee, and Roy, in the saddle, had Trigger rear up on his hind legs and paw the air—right on College Avenue, right outside The Vogue. I saw it. I was there.

Dan Wakefield’s Under The Apple Tree: A World War II Home Front Novel has been
reissued in a new edition by Hawthorne Publishing hawthornepub.com. Follow the author at danwakefield.com 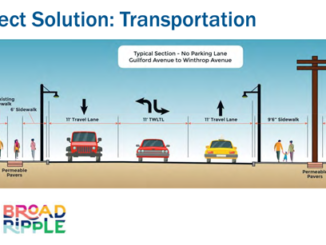 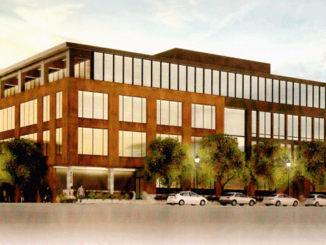 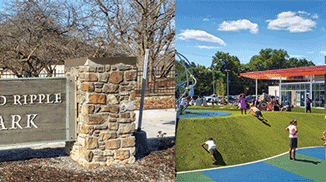