Although the Civil Rights Movement began to reshape race relations, especially by making segregation illegal, the policies and practices of a segregated society continue to influence American society. Residential housing is one area in which the impacts of housing discrimination are destructive and long-lasting. What is not so apparent to many citizens is the relationship between these discriminatory policies and current economic, health, and environmental outcomes.

There is strong evidence of long-term effects on Marion County residents and communities from housing policies enacted almost a century earlier. While these policies were purportedly just about insurance and lending based on financial risk assessment, they also factored in racial composition of the neighborhood, institutionalizing processes that had racially discriminatory outcomes lasting generations. These impacts, which continue today, include the health of residents, crime, income, environmental quality, and economic opportunity, with tracts originally graded ‘A’ having significantly better outcomes, and tracts graded ‘D’ having significantly worse outcomes.

Why Measure Segregation Instead of Race?

This analysis continues our research into economic mobility and opportunity based on the work of Harvard economist Raj Chetty, who found that children born into low income families in segregated cities tend to have lower earnings in adulthood. As of 2000, Indianapolis ranked 14th among the nation’s 50 largest cities on Chetty’s segregation scale.

By measuring segregation at the neighborhood level, we can understand its influence on economic opportunity within Indianapolis. By measuring the effect of redlining, or housing policies of banks and government designed to promote segregation, we aim to show how it resulted in systemic racial inequities in our communities.

Public policy research, including our own work, often uses race to compare outcomes. For example, we might compare standardized test scores or household incomes by race. When we do this, we are using race, a social construct, as a substitute for measuring racial inequities, which are the effect of historical segregation rather than any innate difference between races.

To avoid creating a statistical model that represents race itself as the cause of inequities, we instead directly measure discriminatory actions using segregationist policies (redlining) and their results (racial segregation in neighborhoods of the 1990s). We measure segregation in the 1990s rather than now because we want to examine long-term impacts of segregation as the cause of quality of life outcomes. Therefore, it is important to measure segregation at a time before the effects we measure. This allows us to predict contemporary economic opportunity, health outcomes, and environmental conditions resulting from racial inequities having partial origins in segregationist policies.

What are the Origins of Segregation?

During the early 20th century, African Americans fled the Jim Crow South in a series of mass migrations that by 1960 resulted in a dramatic demographic shift, from 90% of Blacks Americans living in the rural Southeast, to 90% living in urban areas across the country.

Despite the legal and cultural successes of the Civil Rights Movement of the 1950s and 1960s, many states and localities sought to protect existing segregation patterns. Racial steering and discriminatory lending policies, while federally outlawed, were still practiced. ‘White flight’ marked many cities as new suburbs became whites-only enclaves. City services increasingly shifted to the suburbs as urban cores became primarily populated by persons of color. Cities struggled to collect sufficient property taxes to provide adequate resources for various public services, such as education, libraries, policing, fire, and health. This was caused by lower land values relative to suburbs, tax increment financing that removed many properties from the tax rolls, and, in Indiana, state-imposed limits on tax rates. Individuals and families within these communities became increasingly isolated from city resources.

How did Redlining Work?

The Home Owner Loan Corporation (HOLC) was established in 1933 for the purpose of stabilizing the mortgage lending system in the nation. By purchasing mortgages for families that were on default and providing them with better refinancing deals, HOLC allowed for smaller payments over a longer period of time. Between 1936 and 1939, the HOLC embarked on the City Survey Program, which led to the drawing of “residential security maps” for 239 cities nationwide. The aim was to assess the conditions loan officers should use in making loans.

While HOLC might not have used the security maps for the allocation of refinance mortgages, its overseeing agency, Federal Home Loan Bank Board (FHLBB), encouraged lenders to consider neighborhood conditions before making loans (Hillier, 2005). Through its monthly publication, the Federal Home Loan Bank Review, the FHLBB ran a series titled “Neighborhood Standards as They Affect Investment Risk” in which it highlighted the need to consider neighborhood conditions when approving loan. The series outlined the process needed to create security maps that followed the same criteria, classification, and coloring as those created by HOLC.

The residential security maps developed by the HOLC classified neighborhoods in 4 categories:

We created a series of statistical models to quantify the effects of redlining and segregation. We summarize the findings below based on those models. (To learn more about the models and how we addressed causal relationships, see methods in the original post.)

Redlining significantly impacted neighborhood segregation 50 and 80 years later. To quantify segregation, we calculated an isolation index for each neighborhood. This index, based on neighborhood demographics, measures the potential for Black and white residents in a neighborhood to have contact or interaction with each other. The grades assigned to a neighborhood and the surrounding areas in the redlining maps explain 85 percent of the segregation in Indianapolis neighborhoods in 1990 and 2018. Lower HOLC grades (such as “C” or “D”) led to more segregation.

Redlining also impacted which neighborhoods were majority-Black or majority-white. Lower HOLC grades in a neighborhood led to a larger Black share of the population in 2018. In fact, HOLC grades determine 81 percent of the change from neighborhood to neighborhood in the proportion of Black residents.

Our previous report, Equity in Economic Opportunity, demonstrated that children from some neighborhoods grow up to earn less, even when they start from the same income level. Together, redlining and 1990 segregation contribute significantly to this inequity. HOLC grades and segregation explain 51 percent of the difference in opportunity from neighborhood to neighborhood. Being born into a poorly graded neighborhood decreases a child’s annual earnings by $15,000 near age 30, even when their parents’ income remained constant. Adults born into tracts graded ‘A’ have the highest income, almost $35,000; those from tracts graded ‘B or C’ have an average income of just over $25,000; and those from tracts graded ‘D’ have an average income of just over $20,000. 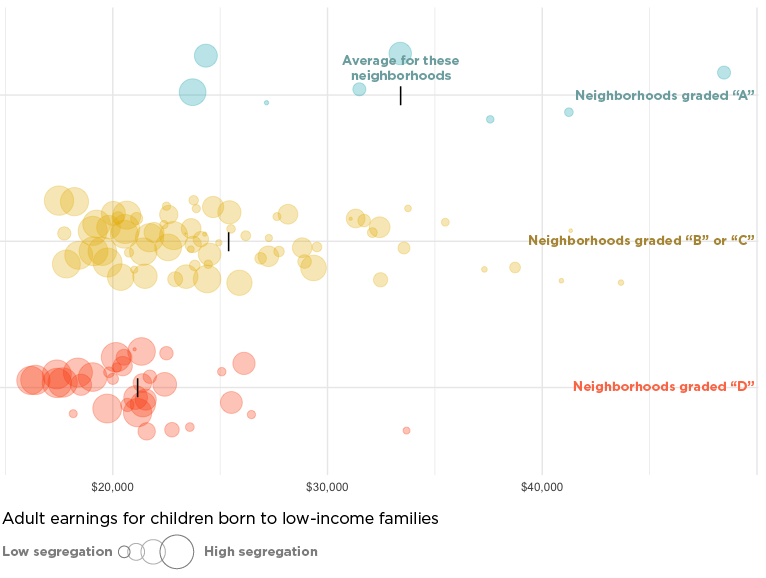 This interactive map shows the degree to which each tract was redlined, segregation values in 1990 and 2018, and economic opportunity for children born to low-income families. 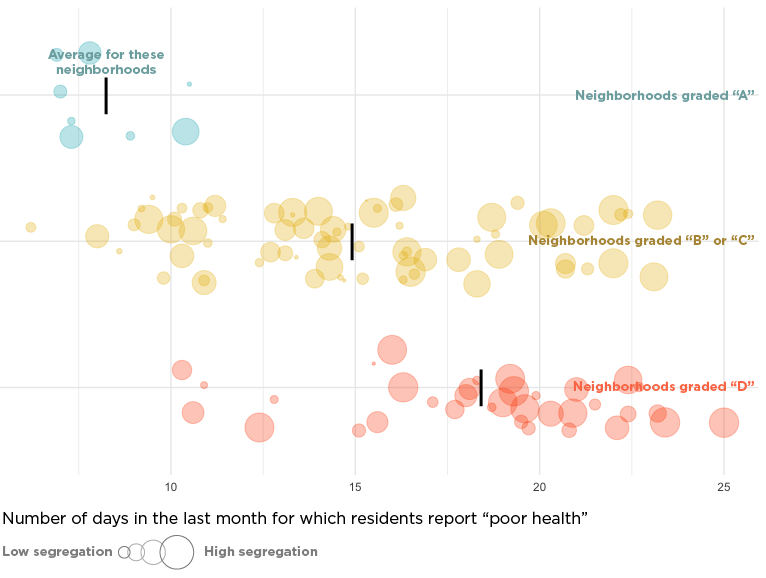 • Segregation resulted in worse environmental outcomes for people of color

There are a number of ways to think about how the environment contributes to the quality of our lives, from the number of trees in a neighborhood to the amount of toxins in the air. We explored both measures, using environmental cancer risk data from the EPA (2014), and tree canopy data from Keeping Indianapolis Beautiful (2013). Both show that HOLC scores and segregation significantly impact our environment.

HOLC scores alone explain 31 percent of the variation in tree canopy today, with tracts graded ‘A’ having the highest density, and tracts graded ‘D’ the lowest. (See Moxley & Fischer 2020 for a deeper analysis of this). The HOLC grades of a neighborhood and the surrounding area predict 91 percent of the variation in cancer risk from air pollution. 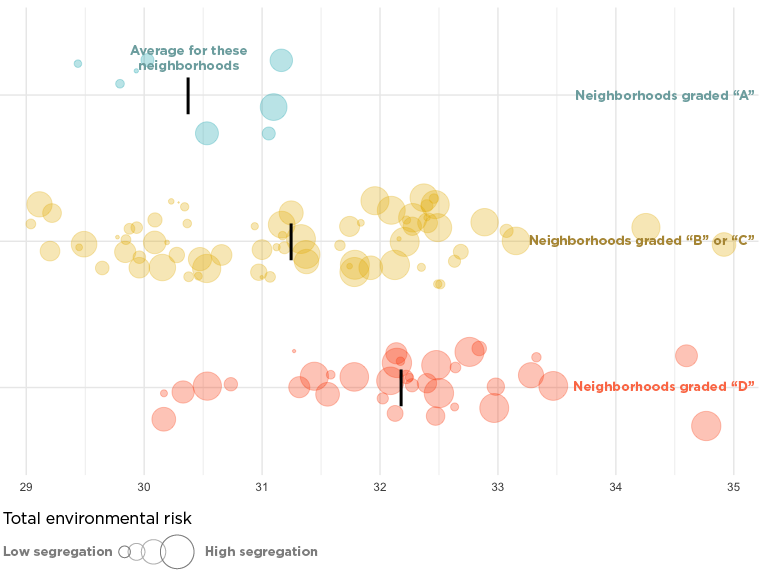 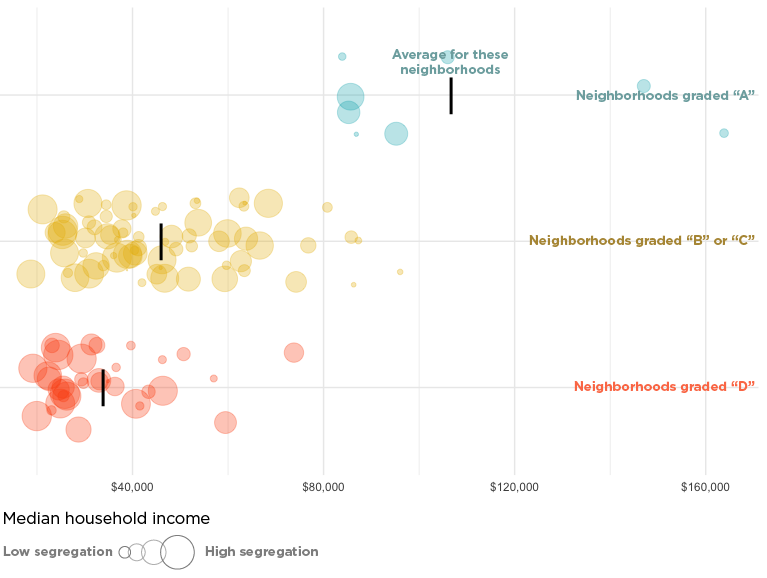 • Redlining and segregation have impacted violent crime and police violence

Finally, we examined the relationship between segregation and violence, including violent crime and police use-of-force incidents. While HOLC grades only explain 29 percent of the variation in police use of force in Marion County, the differences between tracts graded ‘A’ and ‘D’ are stark, almost doubling from 10.7 incidents in ‘A’ tracts, to 20.1 incidents in ‘D’ tracts. Segregation and redlining in a neighborhood and its surrounding area contribute to violent crime, explaining 62 percent of the difference in crime rates between neighborhoods. 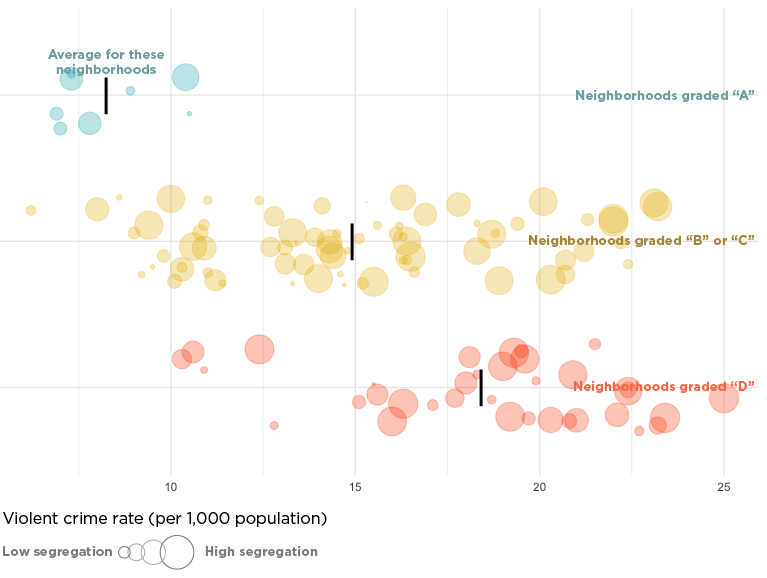 Excerpted with permission from an article that was originally published by SAVI, a program of The Polis Center at IUPUI, a unit in the IU School of Informatics and Computing-IUPUI and SAVI that provides data and research services to nonprofits, governments, and citizens.

Jeramy Townsley is a visiting research analyst specializing in data analysis, statistics, and social science GIS. His work at Polis focuses on both quantitative and qualitative research and analysis for several community and community health initiatives.

Matt Nowlin is a user experience designer with the Polis Center. He focuses on information design, and data visualization.

Chetty, R. (2014). Where is the land of opportunity? The geography of intergenerational mobility in the United States. The Quarterly Journal of Economics 129: 1553-1623.

Glotzer, P. (2020). How the Suburbs were Segregated. Columbia University Press.

Moxley, D, Fischer, B. (2020). Historic HOLC redlining in Indianapolis and the legacy of environmental impacts. Journal of Public and Environmental Affairs 1: 1-8. 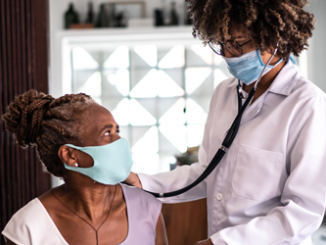 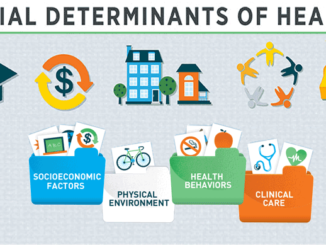