During  public meetings to discuss the Red Line, some attendees expressed concern about the economic, traffic, safety, and development impacts the nation’s first electric Bus Rapid Transit (BRT) system would have on adjacent neighborhoods.

At the meetings, Justin Stuehrenberg, IndyGo’s director of special projects, stressed that IndyGo had used public input to craft a route that would minimize negative impacts. He also agreed that intersections like the one at Kessler Boulevard and College Avenue, for example, would see an increase in congestion.

Responding to a question about development that could destroy neighborhood character, Stuehrenberg said, “Transit is a market enhancer, not a market maker. It can enhance an area like Midtown that is already experiencing some redevelopment pressure.”

This was greeted with some skepticism and disapproval from property owners who fear that improved public transit will result in depreciation of their property values. However, based on the experiences of other communities that have upgraded transportation infrastructure with what is dubbed Transit-Oriented Development (TOD), it appears that Indy is in a position not only to provide additional positive data about the economic impacts of TOD but also is poised to benefit from it.

According to the Center for Transit-Oriented Development, the standard measurement of a TOD’s impact range is one-half mile, or about a 15-minute walk. TOD projects combine uses within the same building or vicinity: jobs, housing, retail shops, restaurants, entertainment, greenspace, and/or recreational facilities.

The goal is to create walkable, sustainable communities that fashion new, identifiable “places” to enhance existing communities within a larger metro area. Across the country, TODs are part of a national trend toward affordable, convenient, and active neighborhoods that support diverse, multi-generational residents and visitors.

In April, HNTB Corporation, an infrastructure solutions firm based in Kansas City, Mo., hired the consulting company Kelton Global to conduct a national public opinion survey on TOD. The results, published as “America THINKS,” found that 51 percent of respondents say the availability of good public transportation increases their interest in moving to and living in a particular area. While 57 percent of millennials are likely to base their residence decisions on public transportation availability, 48 percent of older Americans are too. 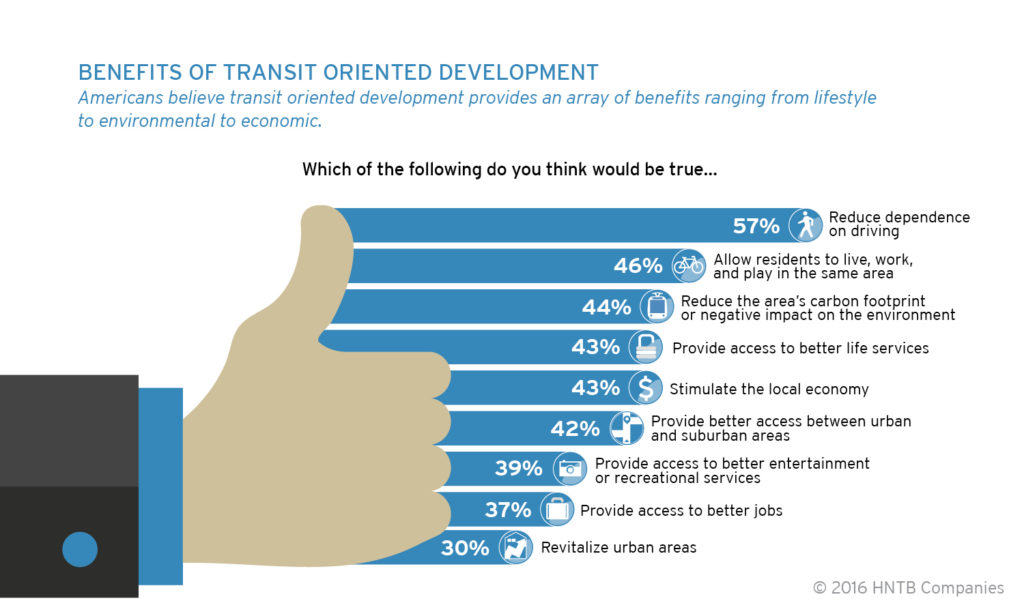 HNTB reports that 55 percent of those surveyed said they would be willing to pay a higher mortgage or rent to live in an area where they could get to places for work and play without using a vehicle. According to TOD statistics, the demand for such properties is growing. The TOD Index is the creation of the TOD Group®, a real estate development, investment, and consultant firm. It regularly analyzes the performance of TOD projects around the country to see how they affect both rental and home values in the half-mile radius of a fixed-route transit station, including BRT. From April 2015 to April 2016, 444 stations under review saw between 10% and 48% rental price growth. The average rental growth for all U.S. apartments at that time was 3.4%.

In a 2011 Center for Housing Policy report, “Public Transit’s Impact on Housing Costs: A Review of the Literature,” author Keith Wardrip writes, “Properties within a five- to ten-minute walk to a transit station already sell for 20 to 25 percent more than comparable properties farther away.”

Wardrip writes that the general consensus of the literature he reviewed finds “that the accessibility benefits of living near transit outweigh the potential nuisance effects and that proximity to public transit does lead to higher home values and rents in many cases.” He does add one caveat: “It is difficult to generalize the magnitude of the impact.”

Wardrip says the challenge comes from several sources: “A home in close proximity to a transit station will be valued more highly than a similar home located elsewhere only if residents value the accessibility the transit system offers.” He found a premium for home values where transit improved access to health care, jobs, and cultural centers better than other forms of transportation. He cites one study of Pittsburgh’s BRT system that found “a significant price premium for homes selling near the BRT line.”

Wardrip noted that “the noise, traffic, and pollution associated with transit systems can cause homes located in close proximity” to light-rail and heavy-rail transit lines or stations “to have lower values than those slightly farther away because they lower the appeal—and thus the market price—of the neighborhood.” Wardrip’s research found no nuisance effects from BRT lines like the Red Line. The Red Line will be the nation’s first electric BRT system. IndyGo points to the clean, quiet operation as mitigating those particular nuisance effects.

Wardrip cites studies from Portland, Oregon, and San Diego that point out the advantage of transit stations surrounded by walkable, mixed-use developments because they offer a range of alternatives to the automobile. Combining the availability of multi-modal options with access to jobs, entertainment, retail, services, and greenspace creates a kind of livability dividend—a synergy of benefits that also has a positive impact on the rents and home prices of adjacent properties.

The Red Line route through Midtown follows the historic Meridian Street and College Avenue transit corridors that spawned the tree-lined, walkable neighborhoods still cherished and the commercial nodes currently seeing reinvestment. So to the real estate mantra of “Location, Location, Location” can be added “Transit, Transit, Transit.” As other cities have demonstrated, it’s not so much a matter of whether proximity to a transit station has an economic benefit; it’s a matter of how much.