Five City-County Council districts overlap Midtown and in each case a majority of voters favored increasing local investment in transit. So what’s next? According to Mark Fisher, who has been the Indy Chamber’s lead transit advocate, the state Department of Local Government Finance will work with transit advocates to craft the necessary language for a resolution that will be introduced to the City-County Council before the end of 2016. Fisher said the measure will be sent to three different Council committees for review and public comment, though only one committee will make a recommendation to the Council for adoption sometime in January. Transit Drives Indy, the coalition of local transit advocates, is calling for all transit supporters to contact their local City-County Councillor and ask them to support full funding of the Marion County Transit Plan. A vote by the Council is expected in early January 2017. 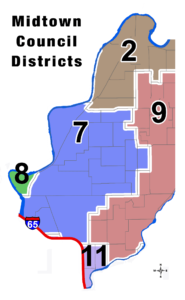 Urban Indy has a cool interactive map showing results for all council districts.