Negotiating snarled traffic in Mapleton-Fall Creek was challenging all summer along Midtown’s southern edge. Fall Creek Parkway between Central Avenue and Delaware Street, as well as stretches of 28th Street and Central Avenue, have been affected while Citizens Energy Group (CEG) completes major infrastructure work in the area.

According to CEG project engineer Nick Maynard, the utility is working on several projects that will result in significant long-term improvements. “We’re currently consolidating five combined sewer overflows [CSO],” he said. Maynard added that the lines along 28th Street will be consolidated in a central location at the Washington Boulevard cul-de-sac that is part of the City of Indianapolis Department of Public Works “Spider” realignment at Delaware and Fall Creek Parkway. That effort created the Delaware Gateway and Silver Fall Park.

Work along Fall Creek Parkway is part of the massive DigIndy project, which involves the installation of a nearly 28-mile underground tunnel system designed to contain nearly 300 million gallons of raw sewage and keep it from contaminating local waterways.

The Fall Creek Tunnel is one of six in the project scheduled for completion in 2025. While construction of the Fall Creek Tunnel will not begin until 2020, design work is already under way, Maynard said. During that process, CEG learned about several current development projects for the area, including the “Spider” reconfiguration and the Central @ 29th project, which will bring affordable housing to an area that has not seen new investment for 50 years.

“That was one of the reasons we expedited the work,” Maynard said. Though most of phase 1 of Central @ 29th is north of CEG’s current focus along 28th street, Maynard said the utility wanted to come in now and get its work out of the way so it wouldn’t have to return in a few years and disrupt a redeveloped area.

Maynard said CEG had to widen 28th Street to install the new CSO infrastructure. In collaboration with DPW and Indy Parks, additional on-street parking will be added along 28th Street between Central Avenue and Talbott Street so people can park and gain access to Delaware Gateway. However, addition of on-street parking meant that plans for bike lanes along 28th street were scrapped.

Work is also under way on a diversion structure on the south side of Fall Creek Parkway. “We’re consolidating a CSO before it goes to Fall Creek,” Maynard said, noting that the pipe will be routed north under the Parkway then west to make the connection at Washington Boulevard.

“In the future we will have our power control building and drop and vent shaft on the north side of the Parkway,” Maynard said. “The dropshaft will drop the CSO 250 feet into the large diameter tunnel under Fall Creek,” he said.

Construction along 28th Street will be completed by June 2017. “All the current work is below grade, so we will continue working through the winter,” Maynard said. In 2020, CEG will return. “We’ll have to do some surface infrastructure 20 to 30 feet below grade to make the final connection, but we don’t anticipate shutting down any roads at that time.”

All of this bodes well for the Central @ 29th project, which is on the road to becoming the first Midtown TIF project in 2016. Phase 1 of the proposed two-phase development will create 114 mixed-income multi-family housing units. Mapleton-Fall Creek Development Corporation and Merchants Affordable Housing Corporation are partnering on the $21 million project.

Because there is no bondable increment available in the Midtown TIF to service bond debt, the developer has agreed to take on the obligation of repaying the debt. The City-County Council has approved Proposition 170 [PDF], an inducement resolution for the issuance of economic development revenue bonds not to exceed $17 million for the project. The resolution expires on March 31, 2017.

A version of this article appeared in the October/November 2016 issue of the magazine. 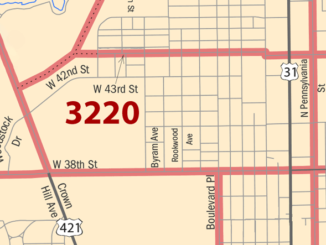