The COVID-19 pandemic of 2020 presented logistical challenges for a lot of professions — not least among them those most essential of essential workers, emergency medical responders.

In Indiana, the largest provider of emergency pre-hospital medical care is Indianapolis Emergency Medical Services (IEMS), which had to keep doing its job while establishing safety protocols for its patients and its own staff. Fortunately for its patients, the team had spent years preparing for just such an event.

According to its 2020 annual report, IEMS workers encountered 2,366 COVID-positive patients between March and December but managed to limit exposure with only 57 providers testing positive for the virus. According to Mike Hayward, IEMS chief of operations, the team’s success in that difficult year was a product of preparedness

“Without IEMS’ robust logistics system the operational capabilities of the entire central Indiana region would have been critically diminished,” Hayward said in the report. That preparedness was built up over time based on events such as the 2001 terrorist attacks in New York and the 2014 Ebola outbreak. Planners could predict that in a future health emergency there would be serious challenges with the supply of medical protective gear.

IEMS set out to get ahead of the problem by building and maintaining at least a six-month supply of personal protective equipment (PPE). That also required the ability to store the PPE stockpile with appropriate environmental conditions to prevent degradation. Working with partners at Eskenazi Health and Marion County Public Health Department, IEMS had accumulated by March 2020:

That preparation also was a major cost savings because this purchases were made over a period of years at normal pricing. Once the pandemic hit and supply chains maxed out, prices skyrocketed.

2020 also happened to be the year IEMS recorded its one millionth run and celebrated its 10th anniversary in its present form.

Though it has roots in the community going back to the 1880s, the team’s current organizational structure is a partnership between the City of Indianapolis, Indiana University School of Medicine, and Health & Hospital Corporation of Marion County, with Eskenazi Health as the supervising health system. 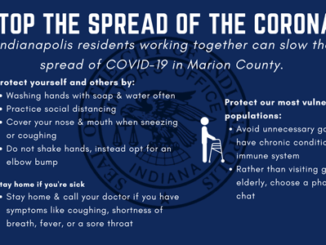